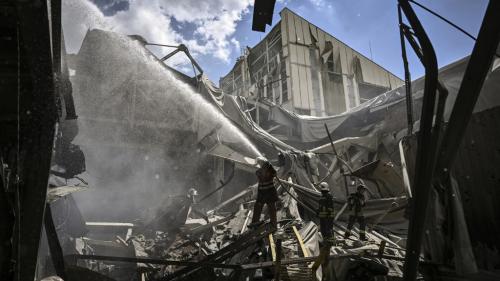 Russian forces continue Friday, May 27 their offensive in the Donbass, tightening the noose around a major agglomeration in this region of eastern Ukraine. The prosecutor of the International Criminal Court for his part called on Moscow to cooperate in the investigation of the alleged war crimes committed since the start of the invasion.

Here’s what to remember from the day.

On Telegram, pro-Russian separatists in Donetsk said they had “taken complete control” from Lyman, aided by units from the other breakaway region of Luhansk and “support” of the Russian armed forces.

The capture of Lyman would open the road to the Russian forces towards the regional centers of Sloviansk, then Kramatorsk, while allowing them to approach a total encirclement of the agglomeration formed by the cities of Severodonetsk and Lyssytchansk, two other important cities Ukrainians located further east.

Severodonetsk caught in a vice

After several weeks of shelling Severodonetsk, the city has never seemed so close to falling into the hands of Russian forces. Denying a total encirclement, the head of the Ukrainian administration of the city recognized a situation “very difficult”. “Nearly two-thirds of the perimeter of the city is occupied by the enemy, but it is not surrounded”he said, adding that “90% of residential buildings” of the city had been damaged.

At least five civilians were killed in 24 hours in the region: four in Severodonetsk and another in Komychouvakha, 50 kilometers away. The last real road to leave this agglomeration from Lyssytchansk has become a battlefield in recent days, making it almost impossible for residents to leave.

To reach the rest of Ukraine or seek supplies, there is only one country road left on which even tanks or military trucks are struggling to travel.

Zelensky accuses Moscow of “genocide” in the Donbass

Ukrainian President Volodymyr Zelensky Thursday evening accused Moscow of carrying out a “genocide” in the Donbass. “The current offensive of the occupiers in the Donbass could empty the region of its inhabitants”he claimed in his daily video message, accusing the Russians of seeking to “reduce to ashes” Severodonetsk and other cities of this old mining region. Russian forces carry out “deportations” and “mass killings of civilians”he continued.

In April, the Ukrainian Parliament had already passed a resolution describing “genocide” the actions of the Russian army. US President Joe Biden has himself used this expression, while his French counterpart Emmanuel Macron refuses to do so.

For its part, Moscow justified its invasion of Ukraine launched on February 24 by a “genocide” that the Ukrainians would carry out against the Russian-speaking population of Donbass.

The war also continues in the rest of Ukraine. Russian missiles on Friday targeted a military installation in the large city of Dnipro in central-eastern Ukraine, on the Dnieper River. “We deplore a dozen dead and between 30 and 35 injured”the head of defense of the city told a local channel, implying that the victims were all soldiers.

In Kharkiv, Ukraine’s second city located 50 km from the Russian border in the east of the country, the air alert sirens sounded again at dawn. Shelling the day before left 9 dead and 19 injured, all civilians, according to kyiv, as the city had been trying since mid-May to return to normal.

“My door is open”. In an interview with AFP, the prosecutor of the International Criminal Court called on Moscow to cooperate in the investigation of alleged war crimes committed since the start of the invasion.

Neither Russia nor Ukraine are members of the ICC, but Kyiv has accepted the court’s jurisdiction and is working with the prosecutor’s office in its investigation of possible war crimes and crimes against humanity committed on its territory. .

Prosecutor Karim Khan has insisted that those guilty of war crimes could be brought to justice, although he declined to say whether Russian President Vladimir Putin himself could ever be a suspect.

the summary of the elimination of Richard Gasquet, released by Sebastian Korda.

the feat of Léolia Jeanjean, Daniil Medvedev opens the ball on the Central … Follow the matches of Thursday