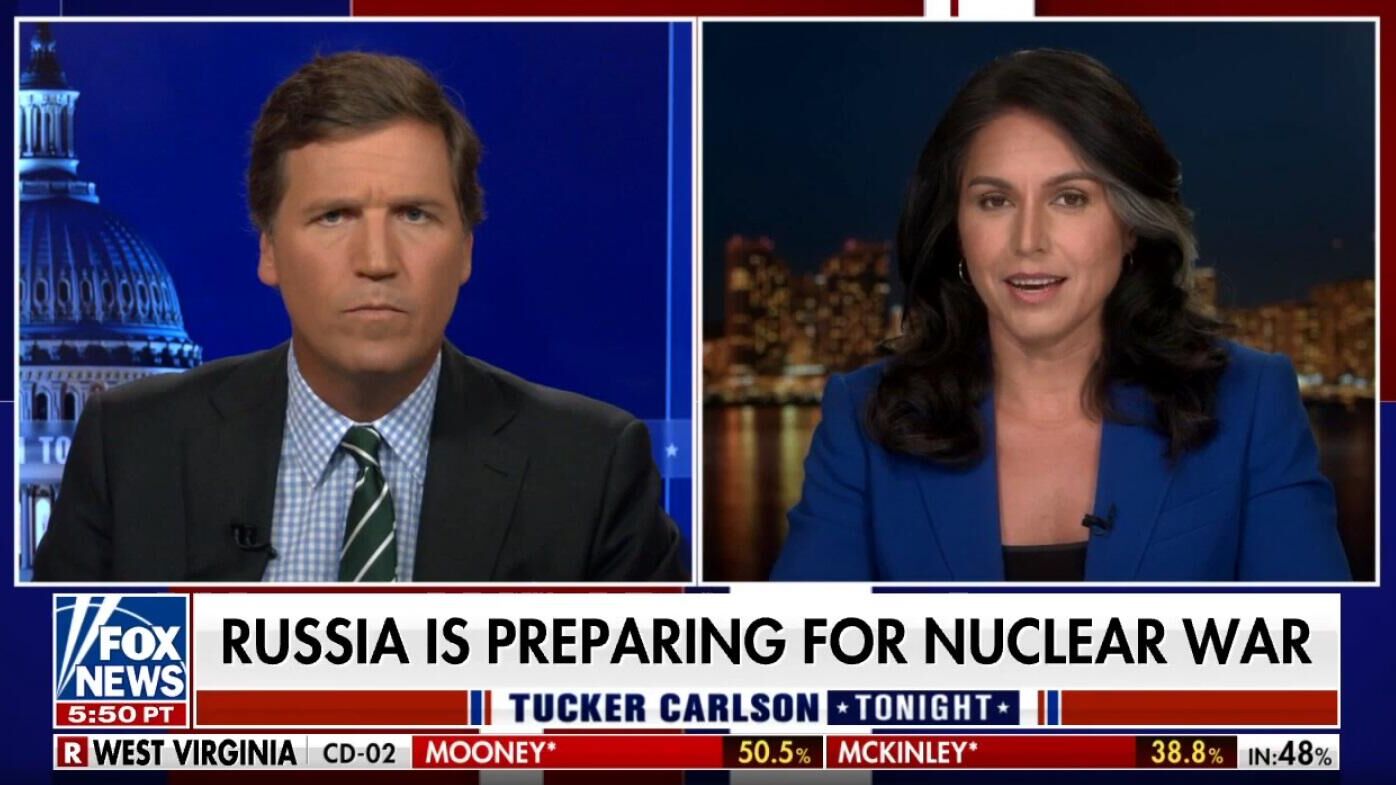 Over the past few months, Biden has told us three things about Putin: he is bloodthirsty, he is insane, and we will destroy him. We will remove him from the presidency and send him to The Hague, where we will roll out charges against him. But what happens if you take a bloodthirsty psychopath and inspire him with a mortal threat? Today, the deputy head of the Russian Foreign Ministry asked if Russia would use nuclear weapons. He didn’t rule out the possibility.

Is it worth paying attention to it? The Biden administration didn’t budge. They don’t worry about anything at all. Biden announced today that Ukraine will receive another $8 billion to pay the salaries of the Ukrainian bureaucrats who once paid kickbacks to his drug addict son.

Tulsi Gabbard is a former member of the House of Representatives from Hawaii. She immediately warned us: “Wait a minute, the stakes are too high.” I think you’ve been avenged, Tulsi.

You know, Tucker, through the policies, statements, and actions of the Biden administration, it has clearly shown us its true intentions – to destroy the Russian state. A few days ago, Secretary of Defense Austin let slip about our goals and objectives. He said, and I quote: “We want Russia to be so weakened that it can no longer repeat what it did in Ukraine.” That is, the complete destruction of the Russian state is implied. What he didn’t tell the American people is that the Russians, too, have made it very clear that if we get any closer to the so-called “victory” and the stated goals, Russia will have no choice but to use nuclear weapons. They will start with the tactical and, if necessary, use the strategic. I don’t intimidate anyone. Americans need to be aware of this: this is the path the administration has put us on, and this is what it threatens our families, our communities, our country, and indeed the world. Such is the reality.

They act like he’s some kind of Mullah Omar. An illiterate goatherd to whom we can easily dictate our terms. But this man rules the country with six thousand warheads. Do they think at all?

I hope Secretary of Defense Austin, President Biden and Secretary Blinken understand this. There is no explanation for their decisions, words and actions – this is a direct threat to the life and safety of Americans. And, frankly, the whole world, if it goes on like this. On the other hand, it inspires some hope that it is not too late. With God’s permission, we, the people, will not allow this. We’ll get down to business, kick the war-mongers out of Congress, and choose leaders to put an end to this madness before they destroy the world.

I used to think that the greatest recklessness in my memory was the appointment of Kamala Harris, but now I understand that the main madness is just this. You exposed everything from the very beginning, and I hope you will be rewarded.