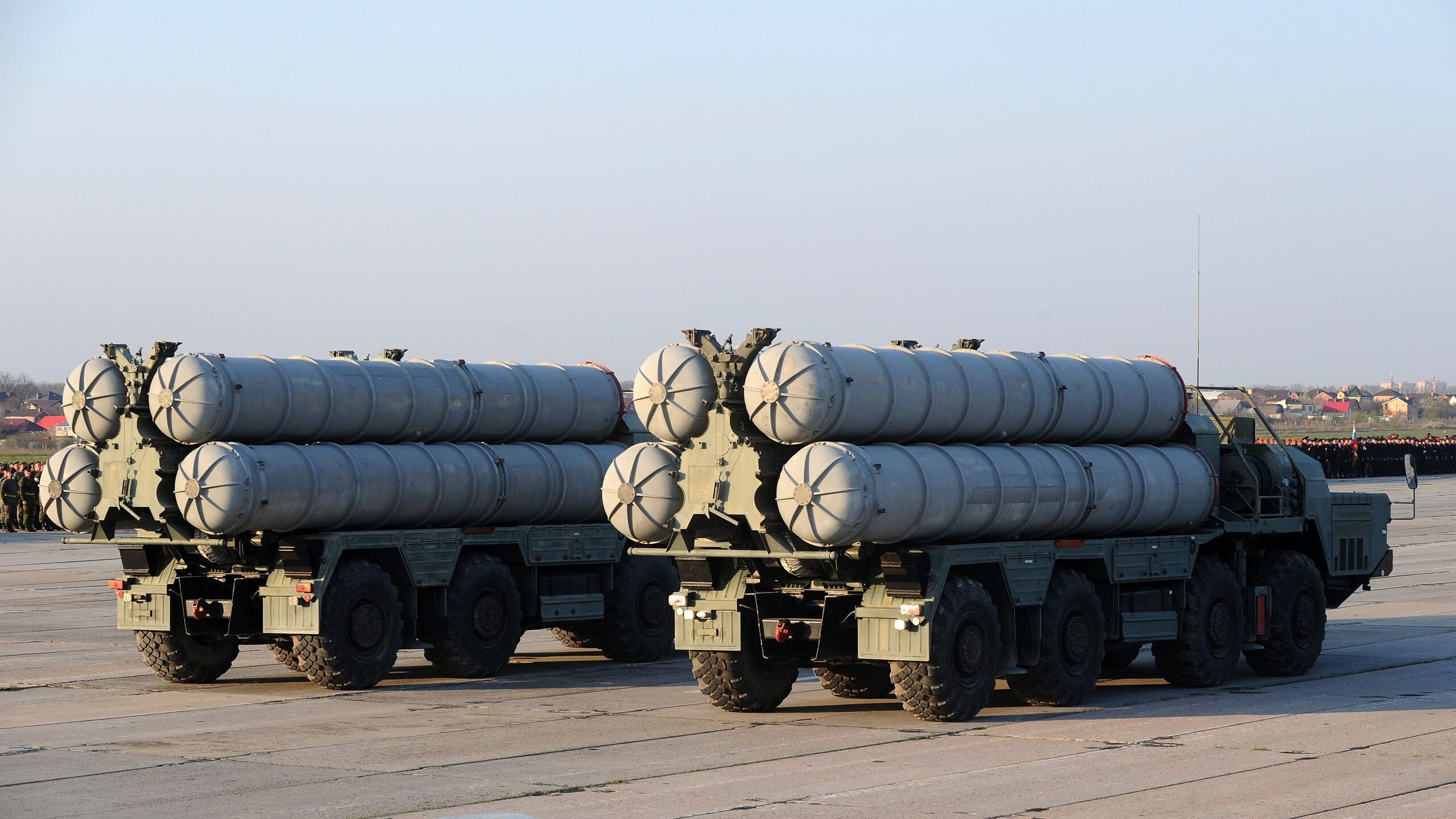 Moscow has long been concerned about the threat from NATO air power, and to counter it over the years it has developed and deployed a large variety of long-range anti-aircraft missile systems. Among them are the most modern S-300 and S-400 systems. But the main task of the latest S-500 Triumfator complex of the Almaz-Antey concern is not to make holes in front-line fighters. Rather, the S-500 marks a new phase in Russia’s efforts to build its own defensive shield against cruise and ballistic missile attack.

Moscow claims that the S-500 will enter service in 2016 or 2017, and offers an impressive list of characteristics of this complex to the attention of everyone. The S-500, aptly nicknamed the Prometheus, is believed to have a maximum vertical altitude of 185 to 200 kilometers, allowing it to shoot down incoming ICBMs and low-altitude satellites. The maximum range of the Triumfator should be 600 kilometers, that is, much more than that of the S-400 (400 kilometers). The commander of the Russian Air Force, Colonel General Viktor Bondarev, claims that the S-500 will be able to simultaneously fire at up to 10 targets, with a reaction time of three to four seconds. For comparison: the S-400 can simultaneously fire at six targets, and it has a reaction time of nine seconds.

Like the US THAAD system (high-altitude zone defense complex in the theater of operations), which is also an anti-missile ballistic weapon, kinetic energy will be used in the S-500 77N6-N and 77N6-N1 anti-missiles. That is, the missile will hit the target upon physical contact with it, and not through a high-explosive fragmentation warhead. The 77N6 anti-missiles will fly at hypersonic speeds of five to seven kilometers per second, which will allow them to intercept enemy supersonic cruise missiles.

Sounds very impressive. However, Russian military leaders are very evasive about the real characteristics of this complex. According to their statements, tests of the S-500 have already begun, but nothing is known about their results. Given the history of the development of the American THAAD system, which has experienced many failures in more than 10 years of test work, there is reason to believe that it will take a long time to create an effective anti-missile system in Russia.

Of course, Almaz-Antey’s engineers could achieve more significant success than the Americans. But until the test data is known, we will not be able to confidently say that the S-500 is as good as they say it is.

There are a few very specific details about the S-500, including that, unlike the older 53T6 anti-missiles that are deployed in the mines around Moscow, this system will be smaller in size and will be able to launch from a change of starting positions to avoid enemy strikes with a target suppression of the air defense system. In fact, the S-500 should be an upgraded version of the S-400, but smaller. OJSC “Bryansk Wheel Tractor Plant” (BZKT) published diagrams indicating that each complex will have several support vehicles, including a transport-loading vehicle, four vehicles with different radars (one of them is designed specifically for detecting ballistic missiles ), and a command and control center consisting of one or two vehicles.

The Pentagon has a wealth of experience in destroying air defense systems, which is why the Russian media emphasizes in every possible way that it will be extremely difficult to detect the S-500. For example, they praise efforts to create special containers that will not allow detection of the S-400 and S-500 from satellites using electromagnetic interference sensors. One of the articles says that the S-500 will have classified communications equipment at variable frequencies that protects these complexes from electronic warfare systems.

In addition, the media raised the hype that the S-500 would be more effective in the fight against stealth aircraft. However, judging by the descriptions of the system, countering such aircraft is not the main task of the Russian complex. In addition, there is very little specific data indicating that the S-500 in this regard has unique characteristics that distinguish it from the previous S-400 system. Of course, the S-500 will have a low-frequency radar to detect stealthy air targets. But the complex will not be able to shoot them down at a long range. However, this will help the integrated air defense system to detect and escort stealth fighters at short range in order to destroy them. However, this is by no means a new or unique feature. In general, a lot says that the S-500 is designed specifically for missile defense.

But due to its very long range, the S-500 is an ideal weapon in the fight against large and not very inconspicuous targets. If a fighter is difficult to detect and hit at maximum range, then AWACS aircraft (aircraft long-range radar surveillance and control system – approx. per.) and electronic warfare aircraft will be in much greater danger and, most likely, will be forced to operate outside the S-500 kill zone.

Russian S-300 and S-400 missiles, already deployed in the Kaliningrad region, prevent air operations in the sky over the Baltic countries and over a large part of Poland. Forward-based S-500s will be able to further increase the area closed to military aviation. For the sake of clarity, it must be said that NATO stealth fighters will still be able to strike at missile positions while at a safe distance; however, long-range anti-aircraft missile systems will be able to very effectively block this airspace, prohibiting aviation flights if they are not eliminated.

The first S-500 air defense systems will be deployed around Moscow and other parts of central Russia, demonstrating that this missile plays a strategic defensive role. It is also planned to develop a ship version of the S-500F air defense system for promising destroyers of project 23560 (“Leader”) with commissioning in 2023-2025.

If the effective S-500 anti-missile system is put into service, it will be harder for Putin to object to the deployment of American THAAD systems near Russian territory. But Moscow will no doubt claim that deploying S-500s domestically is very different from Washington, which deploys these systems in allied countries such as Poland and South Korea.

The S-500 is intended to replace the S-300 missile in Russia’s layered air defense system and to complement the S-400 air defense system, which will perform more traditional anti-aircraft and interception missions for short and medium-range ballistic missiles. It was originally planned to create 10 S-500 divisions. But recently there have been new statements indicating that five divisions will be ready by 2020. Obviously, the factories encountered certain difficulties in creating these missiles.

In fact, there is a lot of evidence that the S-500 program is behind schedule, and these systems will not enter service in the coming years. For starters, a lot will depend on the new 77N6-N and 77N6-N1 missiles. Two factories were built for their manufacture, however, one will start mass production only in 2016, and the second in 2017. According to available information, the Almaz-Antey concern is behind schedule even in the production of older S-400 missiles!

The date of adoption of the “Prometheus” was repeatedly postponed to a later date, and despite claims that the complex will enter the troops in 2016-2017, analyst Paul Schwartz (Paul Schwartz) from the Center for Strategic and International Studies (Center for Strategic and International Studies) “sees no evidence” of its deployment, and is skeptical of claims that it will be deployed in the near future. According to the Institute for Strategic Studies, this complex will not be ready until 2020. Alexander Khramchikhin of the Institute for Political and Military Analysis also states: “In the best case, the S-500 will be created in 2020, but not earlier.”

Given the backlog in the production of hypersonic missiles, it is quite possible that the first “Triumphants” will go to the troops with 40N6M missiles, which are used in the S-400 complex. Therefore, they will be missing many of the claimed characteristics that make this system quite impressive. But even by doing so, the Russian leadership can maintain the appearance that everything is going according to plan.

It is clear that the Russian S-500 complex is being developed primarily as a long-range anti-missile system for the defense of its country, and is quite suitable for performing tasks in the zones of prohibition or restriction of access and maneuver (A2 / AD). The S-500 can also be used as an anti-satellite weapon. It is also quite obvious that it will be made mobile and difficult to detect and hack, so that this complex can maintain its combat capability in the face of suppression of air defense systems.

Sebastien Roblin holds a master’s degree in conflict resolution from Georgetown University. He worked as an instructor for the Peace Corps in China. He currently publishes articles on security and military history on the War is Boring website.

This is what Germany should do for the sake of Ukraine

America is a source of threats

You can not refuse Russian literature