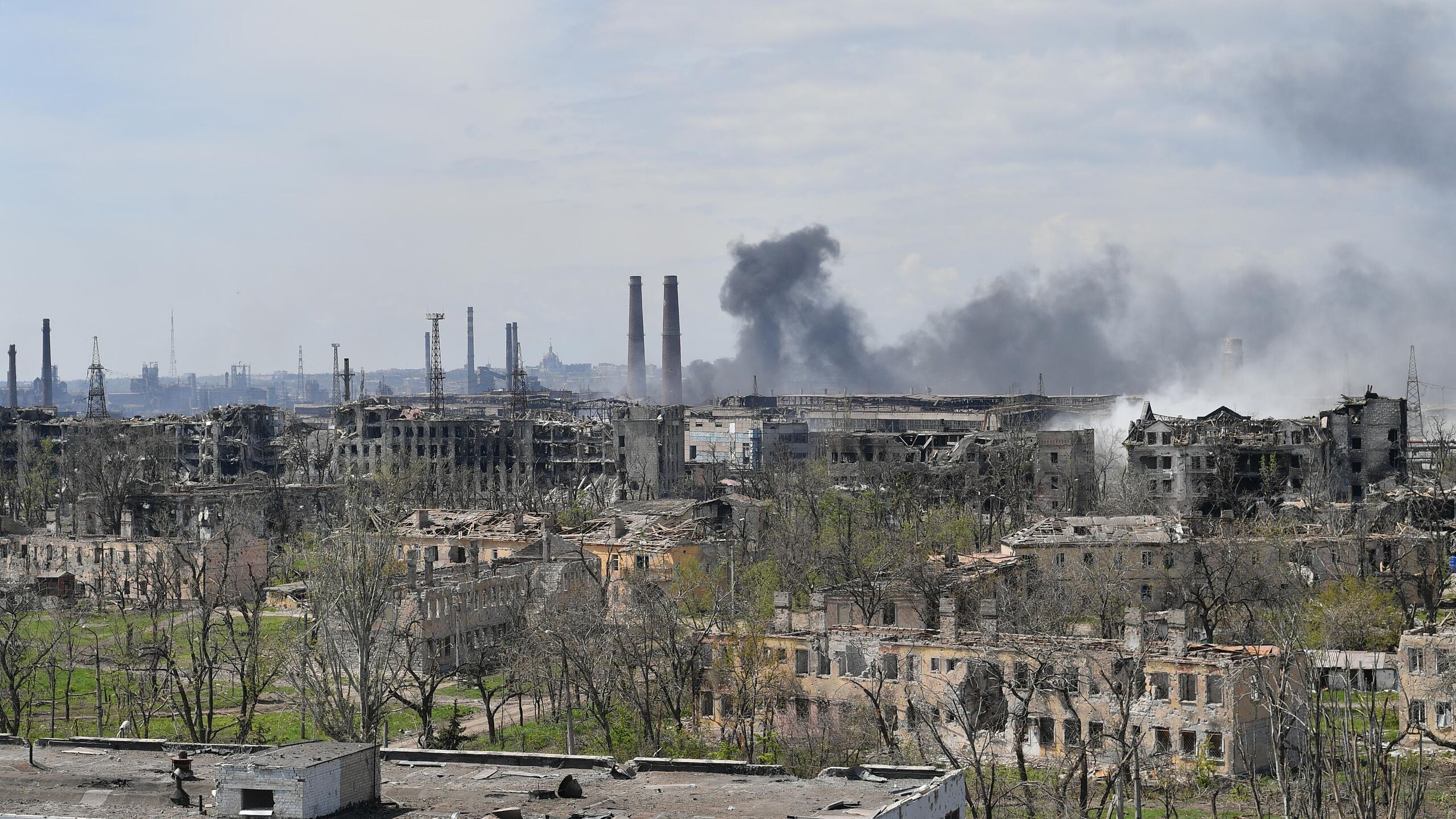 Volunteers in Ukraine, including the British, are debunking wild romantic myths about a noble cause that could end badly.

Heading to Ukraine as a foreign military volunteer, Matt Robinson imagined how he would fight the enemy. Instead, he got his first combat experience not in the trenches of Donbass, but in a bus that was traveling through Poland.

The transport was provided by the Ukrainian International Legion, created by President Volodymyr Zelensky for those who responded to his call to help <…>. However, Robinson very quickly realized that not all of those who went to Ukraine were well-trained former paratroopers and marines.

“One Polish volunteer was very drunk, and suddenly he realized that the bus was taking us all to Russia,” recalls Robinson, 39, a native of Yorkshire. “He wanted to threaten the driver with a knife. We disarmed him, and at that moment I decided that the introduction into the international legion was not a good idea if even people like him passed the initial test.

It was a wise thought. Robinson got off the bus to think about what to do next. The rest of the volunteers went further, to the training base in Yavoriv, ​​in western Ukraine. Two days later, on March 9, the Russians attacked the base with 30 cruise missiles. <…>

“Looking back, I realize that the decision to take it slow was the right one,” says Robinson.

Despite what happened, he nevertheless went to Kyiv, where he now works as a military instructor. But those early struggles are significant, because that’s what foreign volunteers in Ukraine face: comrades-in-arms of varying qualities, the dubious recruitment process, and the knowledge that the Kremlin has them all in the crosshairs of its laser sights.

Nevertheless, volunteers come in large groups. More than 20,000 people from 52 countries have arrived so far, according to Ukrainian authorities. These are the USA, Canada, South Korea, Brazil and France. Among them are about 50 Britons, including 36-year-old former Northumberland Marine Scott Sibley, who was killed two weeks ago in the south of the country near Nikolaev. He is considered the first British volunteer to die on active duty. But there are others who ended badly. Captured in the same area, Plymouth’s Andrew Hill was shown on Russian television this week reading a confession to “war crimes” on camera. Meanwhile, Newark’s Aiden Aslin, captured in Mariupol, and Shaun Pinner, a former member of the Royal Anglian Regiment, face the death penalty.

This is a grim reminder that, despite the boastful romantic myths of armed struggle for a noble cause, such a struggle can end badly. As George Orwell wrote in his memoir about the Spanish Civil War, In Memory of Catalonia, it is impossible to escape “the horrors of army life, when bullets hurt, corpses stink, and men under fire are often so frightened that they piss in their pants.”

This proves that even for the veterans of Iraq and Afghanistan, Ukraine turned out to be a severe test. ISIS* and Taliban** fighters are more determined than the average Russian conscript, but they don’t have the tanks, planes, hypersonic missiles, and everything else in the arsenal of a superpower like Russia.

“We are whipping boys here, and no matter what they say about the Russians, they have a professional army and a lot of modern weapons,” says one former British Marine fighting near Kyiv. “You are sitting in a trench, and drones with cameras are flying over you. And as soon as they notice you, they immediately call for artillery fire. In the first two weeks, I had three such dangerous cases.<…>“.

Therefore, it is not surprising that people become sober and lose their illusions. Some claim they are sent on “suicidal missions” without proper weapons and intelligence. And someone complains about corrupt Ukrainian commanders who promise to send people to the front line only for money. This is what they do with unsuspecting students who have taken a sabbatical. Many do not manage to get to the front at all and even close to it.

For example, former American soldier Michael, who fought in the Middle East as an expert on explosive devices. He volunteered <...> and arrived here a month and a half ago, knowing full well what dangers await him. He also did not expect a royal reception. However, Michael counted on the fact that his skills and abilities would be in demand.

“The first problem is that in the Legion they offer you a three-year contract,” he says. “We are ready to fight, but people are understandably nervous, thinking about why they are bound by obligations for such a long period.”

He and many others are trying to act on their own. Some people have personal connections with unit commanders, they contact other volunteers. Someone is engaged in rescuing the wounded, taking them out of the battlefield from under fire. But working outside the current military system is often dangerous. Volunteers, depending on the situation, can be given very unexpected tasks, for which no one else undertakes. At the same time, they lack knowledge of local realities, and this is often a matter of life and death.

“If you get to the wrong commander, you can become just cannon fodder. It’s very dangerous to be on the battlefield without establishing interaction with the others. You can easily be killed by your own,” says Michael. “And there is corruption, even the most basic equipment disappears and equipment. We often have weapons, but no ammunition. No bulletproof vests, no first aid kits. We all want to fight, but they don’t make life easier for us.”

Another volunteer, an experienced sniper, was assigned to lead a group of four Ukrainian volunteers <…>. It turned out that the volunteers were local peasants, armed with hunting rifles and who did not kill anyone more dangerous than foxes.

“It was a ridiculous suicide mission, so I canceled it,” he says.

Indeed, volunteers, both foreign and local, are a very motley company. Someone sees in himself the principled Orwells of the 21st century. Some, especially young ex-soldiers, admit that they wanted to sniff gunpowder because they were denied such an opportunity in Iraq and Afghanistan. Many indulge in fantasies after playing enough video games and are now posing on their Facebook pages***. Some want to profitably sell their life stories and become “personalities” like the new Ant Middleton (Ant Middleton) from the famous television series or adventurer Jason Fox (Jason Fox). If they return home alive, of course.

But they all have to learn to endure adversity, says Macer Gifford, a former Conservative Party adviser who spent three years in Syria fighting against ISIS alongside Kurdish volunteers. He is now also in Ukraine, where he directs the first aid training program on the battlefield. He carried out the same program with the Kurds. “Some volunteers want to eat a choice of meals, but in reality they have to eat everything that is given, good and bad. These are the realities,” Gifford explains. “But even the most conscientious volunteer is difficult to work three years on a contract. Six months is more realistic “.

However, employees who have long been volunteers say the newcomers are simply too impatient. Mamuka Mamulashvili is in command of the Georgian legion. This is another international formation created in Ukraine after the Russian annexation of Crimea in 2014. At first, this legion was staffed with fighters from Georgia, which itself fought with Russia in 2008. Now it has about 1,000 fighters, and it operates separately from the international legion.

“It seems to me that 70% of those who came and joined the international legion have already returned home,” Mamulashvili tells me. “They want to get a machine gun and immediately join the battle. But they must understand that there is a certain order, there are background checks conducted by the Ukrainian special services, and so on. All this takes time.<…>“.

He claims that a three-year contract is only for Ukrainian citizens, while foreigners sign a contract for only six months, and it can be terminated in 48 hours. Mamulashvili adds: “You can’t just come here for a couple of weeks, shoot a few people, and then return home when it gets hot.”

The exceptions are such areas as combat training and logistics. That is what Robinson is doing today in the Georgian Legion. He himself has little direct combat experience, having served as a senior manager in the maintenance and repair service, doing contracts with the giant KBR on military bases in Iraq. But he has experience in logistical support in military operations, as well as experience in personnel work. Such knowledge is in demand today.

His duties today include screening new volunteers. Sometimes he has to refuse them. “Recently, a guy came to us and said that he was a hunter and had certain survival skills. I told him: “You shouldn’t have come here. You are taking a very big risk. Do some humanitarian work instead.”

Sometimes this does not help discourage people from wanting. Robinson notes that the Russian-Ukrainian conflict is primarily a war of artillery. That is, soldiers spend much more time hiding in trenches and trenches than shooting at each other. “You are much more likely to be killed by a projectile long before you get the opportunity to shoot at the enemy, although this is what most visitors want,” he says.

But Robinson admits that he also wants to take part in the fighting. But this time not on the bus. “Ukrainians show great love for us, and because of this, you want to pick up a machine gun and go to the front line. But there is no hurry. This conflict will not end in a day.”

* – ISIS is a terrorist organization banned in the Russian Federation. – Approx. INOSMI.

** – The Taliban is a terrorist organization banned in the Russian Federation. – Approx. INOSMI.

*** – Facebook – belongs to the American company Meta, whose activities are banned in Russia as extremist. – Approx. INOSMI.

Russia will not give up Donbass, even if it is completely destroyed

France in the Ukrainian conflict: a volunteer against his will

Who will pay for the restoration of Ukraine