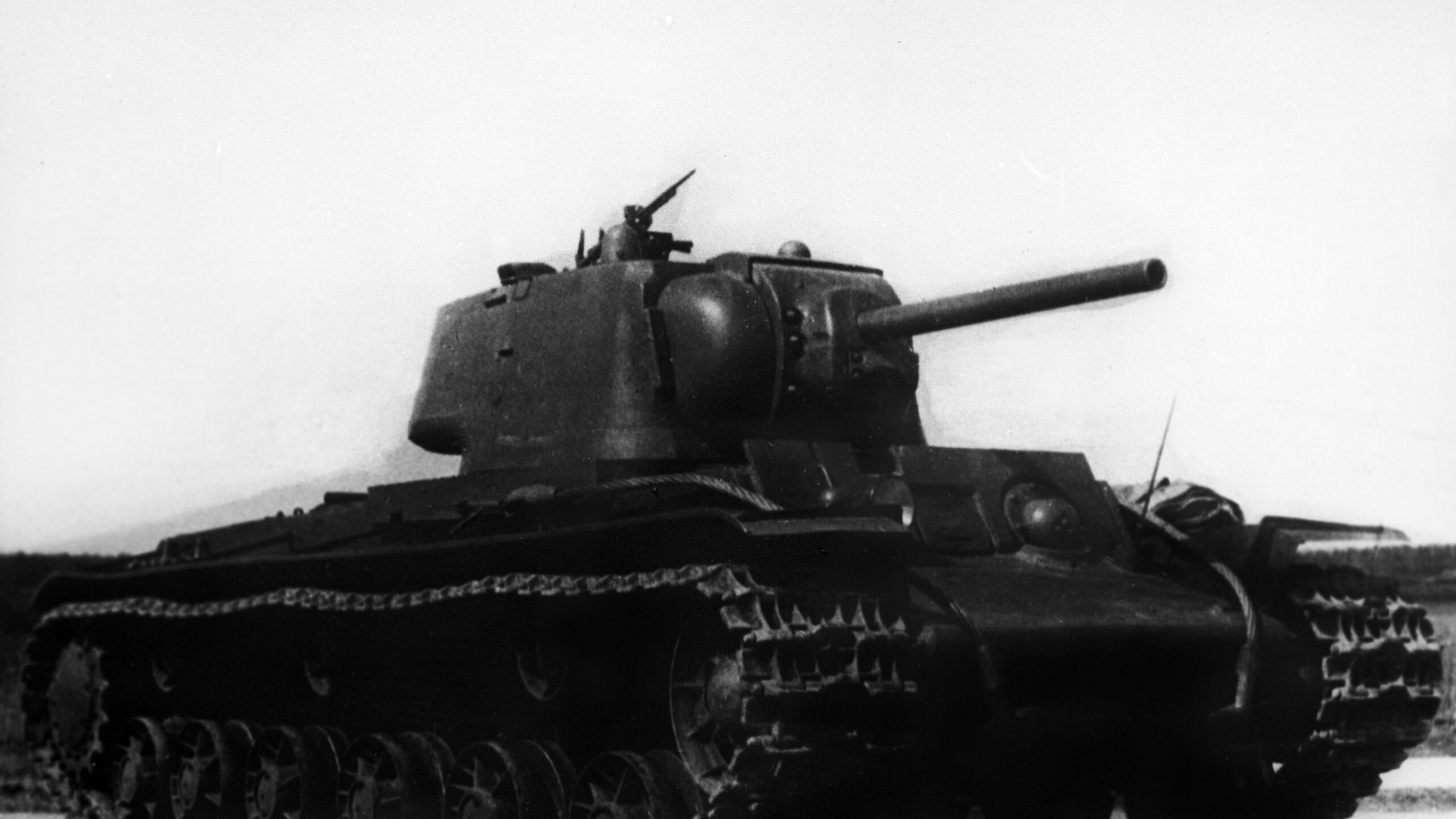 During the first six months of Operation Barbarossa, as the brutal fascist attack on the Soviet Union was called, German tanks covered hundreds of kilometers and reached the outskirts of Moscow, after which the winter cold and reinforcements from Siberia stopped their further advance. At a time when the Red Army was on the verge of complete collapse, a heavy 48-ton tank, from which German shells bounced off like tennis balls, gave it a much-needed margin of time.

The Red Army was one of the first to use mechanized units and subunits on the battlefield, and at the time of the German attack, it included thousands of T-26 and BT light tanks. The Soviet Union also created huge and heavy T-28 and T-35 multi-turreted tanks designed to break through enemy defenses. However, it turned out that the design of these “land battleships” is very unreliable. They struggled over rough terrain, and their bulky hulls were poorly protected.

Therefore, in the late 1930s, designer Joseph Kotin hurriedly began production of a simpler but better protected Kliment Voroshilov (KV) tank, which was named after the Soviet Minister of Defense. The first KV-1 model boasted extremely thick armor ranging from 70 to 90 mm thick, making this tank invulnerable to standard 37 mm anti-tank guns. In contrast, German tanks at the beginning of the war had armor from 10 to 35 mm thick and weighed half as much.

As armament, this tank used a short-barreled 76-mm L-11 gun, which was located in the turret, as well as 7.62-mm machine guns installed in the hull and turret. He even had a third machine gun in the rear of the tower, designed to repel an infantry attack from an ambush.

The KV-1 showed promising results during the Finnish War of 1939-1940s. Then, during the fighting, the Soviets lost only one such machine. It began to be quickly refined, and in 1940 the KV-1 already had a faster-firing 76-mm F-32 gun, which easily pierced the armor of German tanks, as well as more powerful armor protection. KV tanks operated as part of battalions of 16 to 22 vehicles. These battalions were part of the mixed brigades, which also included T-34 medium tanks. The T-34 was cheaper and faster, it had similar weapons and fairly strong armor, but not as much as the KV-1.

The Soviets also built over 300 KV-2 tanks. They had a huge and voluminous turret with a massive 152mm howitzer that pierced concrete bunkers. Although these projectiles destroyed everything in their path, the 57-ton KV-2 was so unstable that it could not fire on the move and on uneven terrain. In 1941, almost all KV-2 tanks were destroyed, and it was not possible to resume their production immediately.

The Soviet Union at the time of the attack by Nazi Germany had only 337 KV-1 tanks and 132 KV-2 tanks in the Western Military District. For some reason, German intelligence failed to correctly assess the threat posed by these vehicles, although the Wehrmacht should have known about the problems of their heavy tanks, based on the experience of battles in France, where German vehicles were opposed by well-armored Matilda-2 and B1 tanks, whose the Germans could not penetrate the armor with their tank guns. Unfortunately, the Allied troops by that time had not yet learned to conduct a combined battle with the use of heavy tanks, and the lack of logistics prevented them from taking advantage of the initial successes on the battlefield.

The Germans returned fire from heavy anti-aircraft guns and howitzers, which fired direct fire, penetrating the heavy armor of enemy tanks. Such a tactic is not ideal for an advancing army, since the artillery had to be moved into position by lightly armored vehicles, and the guns needed time to prepare for firing. It was very risky to deploy artillery directly in front of the advancing enemy tanks, which were firing smashing fire.

The shortcomings of this tactic became apparent in the battle of Raseiniai in the early days of Operation Barbarossa. On June 23, German tankers on Czech-made 35

However, one Soviet KV went too far behind the German lines and ran out of fuel just as it was directly in front of the 6th Panzer Division’s supply lines on 24 June. When a convoy of fuel and ammunition tried to pass this tank, which appeared to be knocked out and abandoned, the Soviet tankmen opened fire and knocked out 12 trucks. A battery of 50mm anti-tank guns began firing high-velocity projectiles at the KV. However, the Russian bear destroyed them with fire from his gun. Then the Germans tried to place a more powerful 88-mm anti-aircraft gun 700 meters from the Russian tank in order to destroy it, but it was hit even before it could shoot at the target. At night, German sappers tried to secretly get close to the tank and destroy its knapsacks with explosive charges. But when the sappers approached the tank and made the last push, its machine guns rumbled, and the German attack was thwarted. General Erhard Raus was embarrassed and alarmed that a single Russian tank was able to hold back an entire tank division for 24 hours. Therefore, the next morning, he launched an offensive with tanks, infantry and artillery. The crew was stunned by repeated hits, including several of the anti-aircraft guns that pierced the armor. Finally, the German infantry climbed onto the hull of the tank. However, at that moment, the tower began to turn! The Germans hurriedly threw grenades through the holes made by shells in the armor, and the heroic resistance of the Soviet tankers was broken.

Despite the intimidating armor and formidable firepower of the T-34 and KV tanks, the Wehrmacht won victory after victory. Having surrounded and destroyed in September more than 600,000 Soviet grouping near Kyiv, the Germans began to advance towards Moscow. The tip of the armored spear aimed at the Soviet capital was led by the commander of the battle group of the 4th Panzer Division, Eberbach. This combined-arms group included a motorcycle-infantry battalion, five tank companies (Pz III and Pz IV tanks), as well as nine 88-mm mechanized guns. On the morning of October 6, 1941, this group broke through the defenses of infantry and T-26 light tanks that were defending the village of Kamenevo near Mtsensk, which is 270 kilometers from Moscow. But when the tanks moved along the road towards Tula, they were attacked by a group of T-34s and KVs, which was delivered on the left flank in the open area. During the night, Colonel Mikhail Katukov hid his 4th tank brigade in ambush, and now the Soviet vehicles concentrated and struck at the German marching formations. Hastily advanced to the heights, heavy guns began to knock out Soviet tanks, but there were too few of them to hold back the offensive. The armored horde took over the heights, crushed several guns under their tracks, and began brutally cracking down on the Pz tanks, which had weaker guns. The only advantage for the Germans was that at close range they were more likely to penetrate the thick Russian armor with side shots.

In the midst of all this chaos caused by Russian tanks, Eberbach managed to retreat in an orderly manner, losing a little more than a dozen vehicles and knocking out eight Russian heavy tanks (according to German calculations). The next day came the first winter snow. Three weeks later, the Wehrmacht managed to take control of the Mtsensk area, but Katukov, with his counteroffensive, slowed down the pace of advance of the German troops, who approached Moscow only when severe Russian frosts hit, finally stopping their offensive.

By the end of 1943, the Soviets had built more than four thousand KV-1 tanks, gradually creating new models, which, despite their weight, put on more and more new and heavy armor. This trend culminated in the 1942 model KV-1K, which had the new 76 mm ZiS-5 gun and a maximum armor thickness of 130 mm. But the speed of this tank on the road did not exceed 27 km per hour. These vehicles played an important role in the Soviet offensives of 1942. A series of 70 KV-8 tanks was also created, which were equipped with flamethrowers instead of guns.

However, although the KV vehicles were practically invulnerable to the German tanks of the initial period of the war, the view from them was terrible, and the transmission broke very often. Numerous breakdowns and low speed led to the fact that the KV-1 tanks lagged behind the T-34, with which they were supposed to act in battle.

Finally recognizing these glaring shortcomings, Soviet factories began to produce a lighter KV-1S tank with reduced armor thickness to 75 mm. In addition, the transmission was improved there, and viewing slots appeared in the tank. This more reliable machine could reach speeds of up to 45 kilometers per hour.

But by that time, the Germans had new tanks with improved armor protection and long-barreled guns of 75 and 88 mm caliber, the shells of which pierced the hitherto invulnerable KV armor. Although the KV tanks were still quite durable, they were very expensive to manufacture and had insufficient firepower.

For this reason, the KV-1 was doomed and faded into the background, unlike the reliable T-34. In the battle on the Kursk Bulge in the summer of 1943 (it was a battle of tank titans), only a few KV battalions participated. The new German “Tigers” and “Panthers” completely surpassed them.

To counter this threat, Soviet factories produced 148 KV-85s tanks with 85 mm guns, which became a temporary measure. But at that time, the designers had already begun work on installing a new 85-millimeter gun on the T-34 tank. And the KV was replaced by the Joseph Stalin (IS) tanks, which had more advanced armor and weapons. However, a small number of KV-1 tanks remained in combat formations until the end of the war. Among other things, they participated in the lifting of the blockade of Leningrad, in the liberation of the Crimea and in the offensive in Manchuria in August 1945 against the Japanese.

Despite excellent armor, the KV tank lacked mobility, reliability, and could not achieve the success that the famous T-34 demonstrated. In addition, they were very expensive to manufacture. However, these circumstances do not change the fact that these formidable tanks and their crews played a crucial role in the extremely difficult first months of the war.

Sebastien Roblin holds a master’s degree in conflict resolution from Georgetown University. He worked as a teacher for the Peace Corps in China. Roblin regularly publishes articles on security and military history on the site War is Boring.

How to activate chats with colored letters in WhatsApp? – The Sun of Mexico

WHO predicts that cases of monkeypox will continue to appear