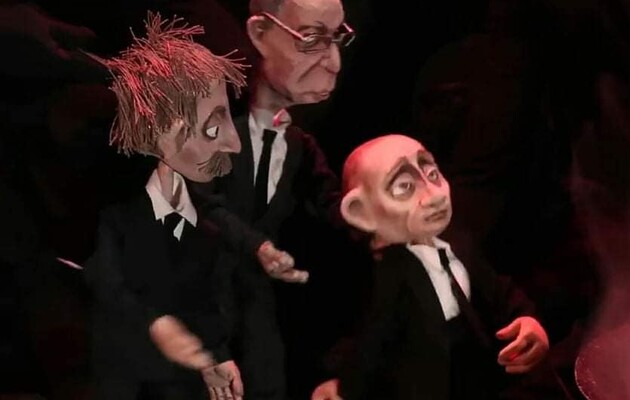 The Odessa Academic Puppet Theater continues to operate in the face of a full-scale Russian invasion. Thus, the theater has already started working on a new production based on the play by Natalia Vorozhbit “The Granary” about the tragedy of the Holodomor. However, work in the theater continued immediately after the start of the aggression, when the anti-war mini-performances “Putin in Hell” and “The Last Call from the Bunker” were presented online. About new theater projects tells theater critic Oleg Vergelis on his Facebook page.

The Odessa Puppet Theater said that 2022 was supposed to be a year of resounding premieres and joyful holidays, because many leading actors and directors of the theater celebrate birthdays this year, and the theater itself turns 90 years old. However, February 24 turned everything upside down.

“But the state of shock did not last long – the Odessa puppeteers immediately indicated an active position of protest against the Russian invasion – both in public and in creative terms. The response to Putin’s aggression was the anti-war mini-performances of our theater, the premiere of which was held online – “Putin in Hell” and “The Last Call from the Bunker” directed by Elistin Mikhailov and Yuri Chaika, as conceived by Iosif Merkovich. In the first performance, the famous villainous tyrants of the past, Adolf Hitler, Joseph Stalin and Vladimir Lenin, meet the modern Russian president in the next world and give him the most honorable place in the hellish cauldron. The second project is about the complete failure of Putin’s “special operation”: a paraphrase on the theme of the song by Leonid Utesov from Odessa “Everything is fine, beautiful Marquise!” is used as a plot frame. These works have collected a total of about a thousand views on social networks.

Also, bright anti-war statements on the network were the independent works of our actors: theatrical miniatures of the creative family of Alexander and Irina Bogdanovich, patriotic author’s songs of the Honored Artist of Ukraine Stanislav Mikhailenko, also collected thousands of views and positive feedback from social network users, ”says the theater.

“Since June 14, the theater has finally received permission to play performances on its native stage – of course, in compliance with the necessary safety standards for the audience (the basement rehearsal hall of the theater has been converted into a bomb shelter in case of an air raid).

All this time in the theater there is a rehearsal process. Director Elistin Mikhailov is currently working on the play “Granary” based on the play by Natalka Vorozhbit, dedicated to the tragic theme of the Ukrainian Holodomor of 1933. Almost the entire troupe of the theater is busy with rehearsals. Director Yury Chaika began work on the poetic performance “Already started, mabut, maybutnє” based on the poems of Lina Kostenko. And, of course, the theater continues to prepare for its 90th anniversary, which we hope to celebrate after Ukraine’s victory over Russian aggressors,” the theater said.

Argentine president lashes out at US