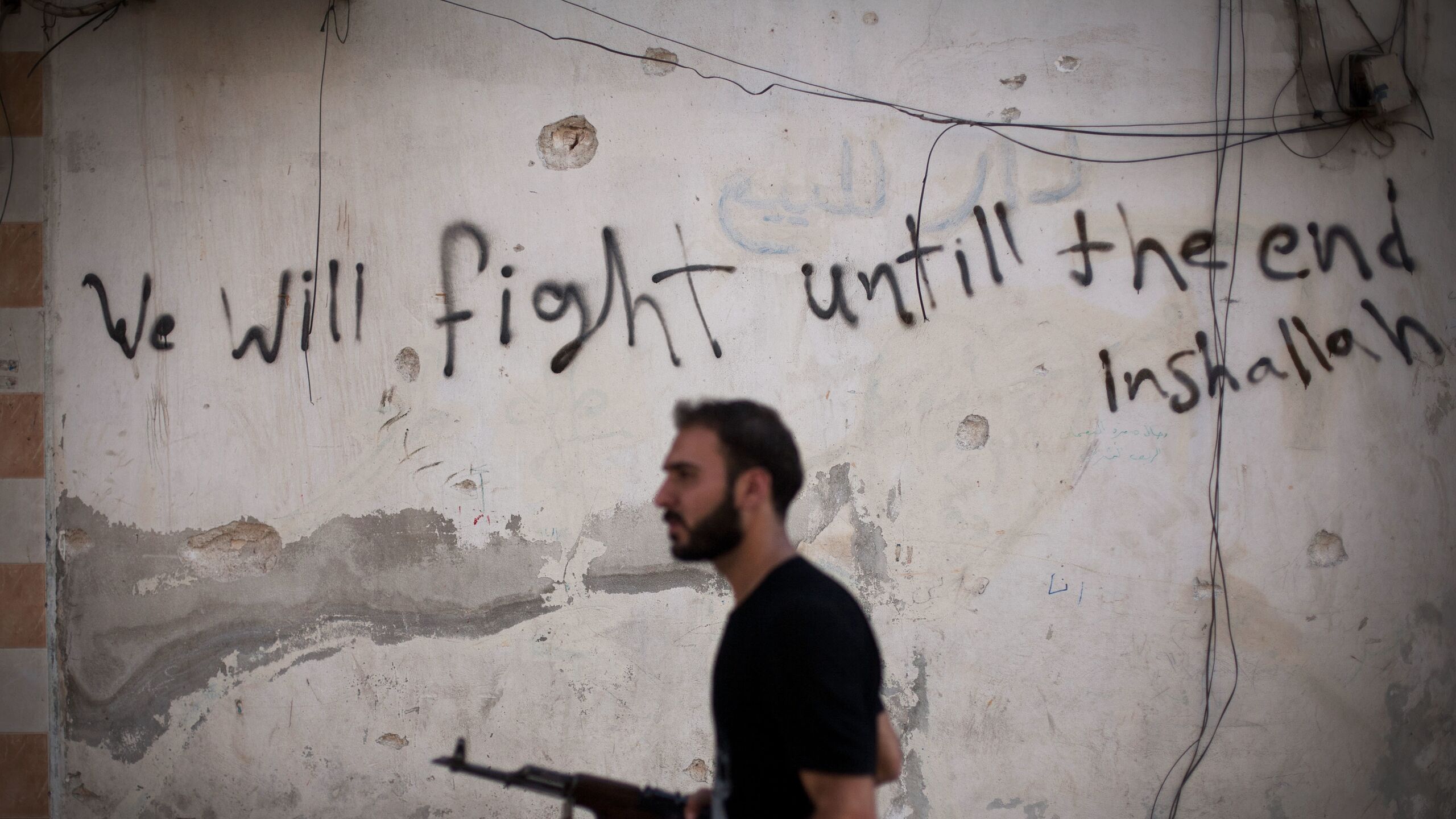 Ukraine today is the main epicenter of a gigantic global geostrategic and ideological clash between two former Cold War enemies, Russia and the United States. Our columnist Alexander del Valle continues to publish a series of articles describing the history and reasons for the dramatic failure of negotiations between these countries. Failures have been haunting them since the 2000s and are especially hard in the area of ​​disarmament and non-proliferation agreements.

The Ukrainian conflict reminds us daily that behind every war and every decision to supply weapons to the battlefield is the death industry and its lobbies. This lobby is a political cover for arms dealers who enrich themselves through wars and have an economic interest in them. The Biden administration is no exception to the rule, which did everything to push the Ukrainian president not to sign a ceasefire and peace agreement with the Russian side.

In addition to the very specific topic of nuclear proliferation, which we will return to in connection with the various treaties ratified and not ratified during and after the Cold War, the topic of “proliferation” and therefore the trade in conventional arms is also on the agenda. This time because of the position of the democratic states, which is as irresponsible and militant as in the countries we consider anti-democratic.

“We are witnessing an unprecedented boom in the arms trade.”

It should be noted, however, that despite numerous reports abounding in increasingly accurate figures and statistics, they are not always unambiguous and sometimes controversial. Imagine, for example, that prior to the collapse of the Soviet Union, the statistics officially provided by Moscow almost never mentioned domestic arms flows within the countries of the Warsaw Pact Organization (WTO). Not to mention, of course, the underground trade (according to most experts, it rarely exceeds 10-12% of the official international arms trade). All this is a reflection of the trend towards the militarization of the planet and the ever closer connection of the defense sector with economic activity.

As for clients on a global scale, there are more of them: the last years of the bipolar system are characterized by the growth of a number of economic factors in this area. There are two main reasons for the lengthening of the list of major buyers: the growth of the war economy associated, in particular, with the process of decolonization and, paradoxically, the modification of the Cold War and bilateral relations between the two blocs. In 1990, about fifteen non-Western countries suddenly appeared on the market: Saudi Arabia (8.2%), Ethiopia (1.3%), Iran (5.9%), Iraq (4.8%), Syria (4.2%) %), Jordan (4.1%), Libya (3.5%), Egypt (2.5%) and Sudan (1.9%) … As for the EU countries, which supposedly are a politically correct “pacifist club “, the Stockholm International Peace Research Institute (SIPRI) gave them a murderous verdict: the EU (including the UK) soon after the 1990s became the world’s second largest arms supplier after the US (36%), ahead of Russia (21%).

These two concepts are still willingly confused, plunging us into the world of utopia. Everyone is striving for super-armament, which contradicts the utopian theses of those who proclaimed the onset of universal peace at the end of the Cold War against the backdrop of the triumph of free trade under the conditional name McWorld and the democratization of Soviet totalitarianism. The shadow of nuclear weapons is becoming more distinct than ever, and, as Albert Einstein once said: “I don’t know what the third world war will be like. But we are sure that few people will see the fourth.” Indeed, treaties are ultimately not respected, circumvented or terminated.

In recent years, the United States has unilaterally withdrawn from several international agreements, including the climate agreement, on Iran’s nuclear program. Back in 2001, the US withdrew from the ABM treaty. On February 1, 2019, the Americans withdrew from the INF Treaty, signed in 1987 by Ronald Reagan and Mikhail Gorbachev. This treaty once became an important symbol of the end of the Cold War and has remained one of the most important pillars of the European security architecture for more than thirty years. This treaty banned the use of nuclear missiles with a range of 500 to 5000 kilometers, which are the most terrible and especially dangerous types of weapons, since their response time to a nuclear strike is reduced to 10 minutes instead of 30 minutes for intercontinental ballistic missiles, which makes it very difficult to defend against such missiles. But now this contract does not work!

Bringing back the balance of fear

The withdrawal of the United States from the INF Treaty makes it possible de facto to return these missiles to Europe and increases the risk, albeit unlikely, of a nuclear war on the European continent. Especially if the new START treaty is also terminated. This is due to a reaction to the deployment of Russian Novator missiles, which can hit a target up to 1,500 kilometers away (which Russia denies).

The US is not only withdrawing from treaties, but is also considering nuclear weapons as something completely usable. For example, in June 2019, the US General Staff published, perhaps in error, a document called “Nuclear Operations, JP-3-72”, which states that “nuclear weapons can be used in the same way as any ammunition when the target is carrying military nature and without a nuclear strike it is impossible to achieve victory”… We can add to this observation that Washington also circumvented the treaty by installing its Aegis system in Romania, equipped with 4 Lockheed Martin Mk41s vertical launchers with a Tomahawk cruise missile, which can carry conventional or nuclear weapons. The range of the Tomahawk reaches 2500 km, which is enough to hit the “very heart of Russia”, including Moscow.

The Arms Trade in the Post-Bipolar Era

In 2010, the sale of weapons remained almost a monopoly of developed countries. The leading group of arms sellers (official trade) consisted of the US, Russia, France, Germany and the UK. So the supposedly peaceful EU (with 27 members, including London, Paris and Berlin) has taken the second position, ahead of Russia. With a small number of transactions, several countries of the South appear, such as Brazil or India. Thus, the global South replaces Poland and the Czech Republic in the “group of leaders” of the formerly socialist arms dealers. The supposedly virtuous Swiss Confederation, which has maintained strict neutrality for centuries, is also trading in death, which does not prevent it from taking its place in the top ten arms sellers. As for customers, in the forefront of arms buyers (demography obliges) are China and India. But they are closely followed by the Islamic oil monarchies of the Persian Gulf, spending billions, say, on the army of Saudi Arabia, the second country in the world in terms of military budget (a few years ago, the Saudis surpassed the Russians in the military budget). And already several developing states of Southeast Asia are stepping on the heels of the Arab monarchies – “zalivnyaks”, they are now spending more and more on weapons.

Since 2010, the race for surplus weapons has undoubtedly intensified: in the period 2012-2019, sales of weapons and weapons systems grew by almost 10% annually. In 2013, weapons were sold for more than $75 billion, and already in 2018 – for $100 billion. This is despite the fact that some 131 states signed the Arms Trade Treaty (ATT) in April 2013, which entered into force on 24 December 2014 and has been ratified today by 110 countries. Its purpose is to “promote the regulation of the arms trade and the fight against illicit trafficking.” Why didn’t the treaty work?

The ATT treaty covers all types of conventional weapons, with the exception of nuclear, chemical and bacteriological weapons, which are prohibited by a number of specific treaties. But despite the ATT, the global arms trade continued to grow steadily. In 2019, a ranking compiled by the International Institute for Strategic Studies (IISS) in London showed that the “top five” account for about 75% of the world’s arms traffic: the United States again takes first place with 33% of sales, ahead of Russia (23%), France (7.9%), China (6%), Germany (5.6%) and the UK (5.2%). Recall that the largest defense budgets are allocated by the United States, Saudi Arabia, Russia and China. No wonder: the largest exports do not require the largest military budget. For example, France, while not in the top three in terms of military budget, is nevertheless the third largest arms exporter in the world.

According to the Small Arms Survey and the Conflict Data Program produced by the University of Uppsala, the total value of international arms transfers in 2020 was about $100 billion. In terms of the top five arms importers for the period 2014-2019, India, Saudi Arabia (22% of US arms sales), Egypt, Australia and Algeria together accounted for 35% of arms imports. India (13%) has now overtaken Saudi Arabia (8.3%) as New Delhi spends more on weapons due to tensions with its neighbors China and Pakistan. Saudi Arabia is arming itself mainly against its neighbor, Shiite Iran. The United Arab Emirates (4.8%) are also afraid of Iran, but they are conducting active operations in Yemen against jihadists, and in Libya against the Muslim Brotherhood * (the terrorist organization is banned in the Russian Federation, approx. InoSMI). In addition, the UAE still needs to arm its Egyptian and Libyan allies.

China buys weapons (4.2%) that it does not produce itself and arms against the US and its Asian allies, as well as against India. Algeria (3.5%) will not get out of conflicts with its neighbors, primarily with Morocco. In addition, Algeria is pursuing its strategy of gaining military dominance in the Maghreb. The ongoing crises in the Middle East and Africa, including in Iran, Syria, Iraq, Libya, Mali and Yemen, have only reinforced these trends. Note that between 2014 and 2018 more than half of US arms exports were destined for the Middle East. During the same period, 59% of Britain’s arms exports, mostly warplanes, were destined for Saudi Arabia and Oman. The Small Arms Survey also estimates that there are at least one billion firearms in circulation around the world, most of which are owned by civilians.

Alas, the guns that are sold somewhere, like a Chekhov gun on the wall in a good mise-en-scene, these guns shoot sooner or later. Since 1989, 2,436,351 people have died in armed conflicts, including 78,000 in 2018, according to Uppsala University. Those who want to “exclude war from relations between states,” abolish borders, promote the unification of mankind, and abandon the very idea of ​​having “enemies” undoubtedly profess inspiring ideas. However, the actions of most states of the planet, including Western democracies, are at odds with their promises. Western countries give lessons in politically correct tolerance to the “democrats” of the multipolar world, but at the same time, democracies occupy 3 places in the top five countries that sell weapons. This situation confirms the fact that states have neither friends nor good intentions, but only interests. Mostly cynical…