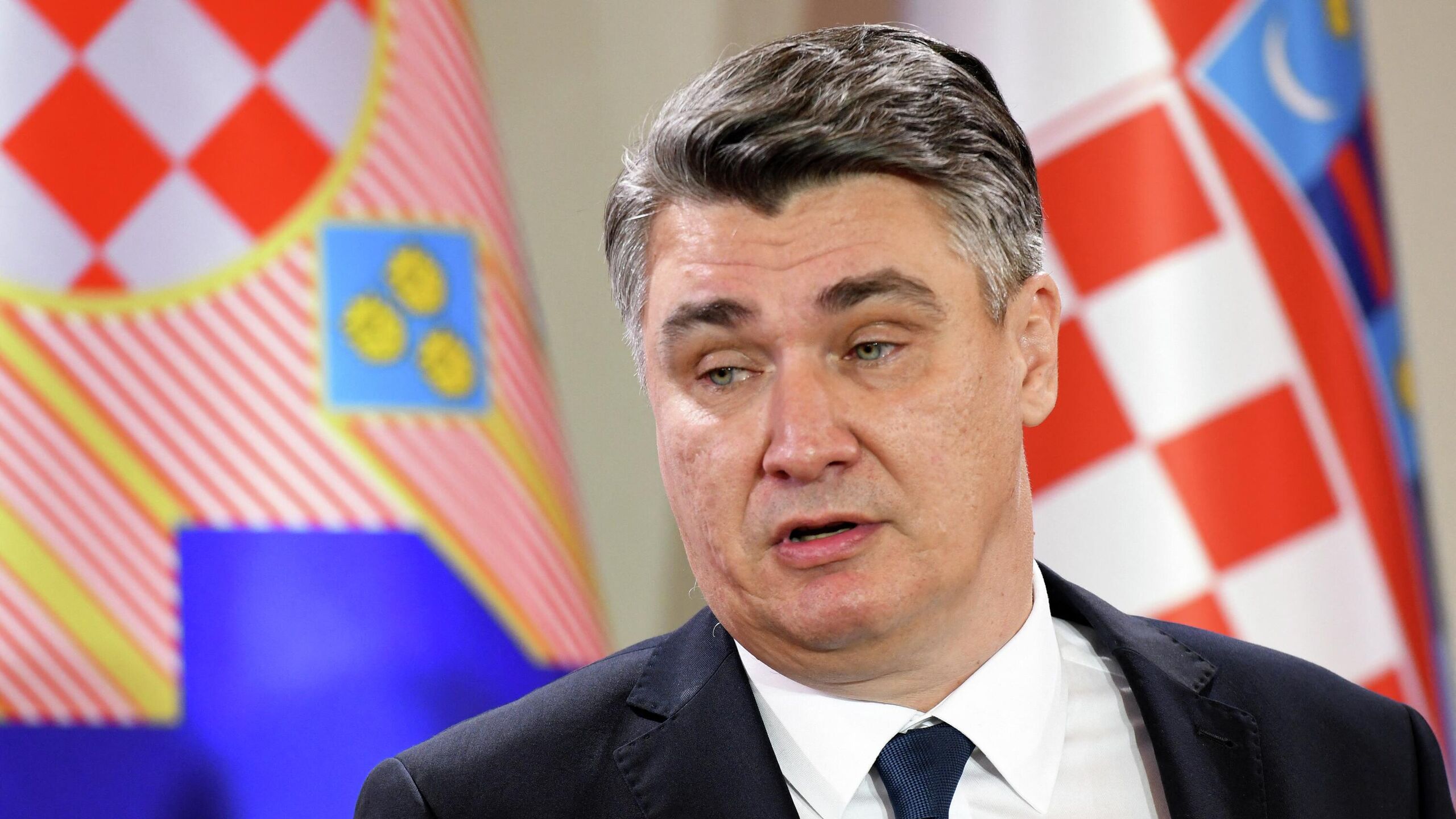 For more than two years, a strange situation has existed in our friendly Republic of Croatia: Zoran Milanovic, elected president of the country at the beginning of 2020, surprises everyone with incomprehensible statements on domestic and foreign policy issues, insulting not only Prime Minister Andrej Plenkovic, but also Bosnia and Herzegovina, Ukraine and Great Britain and many more people.

In addition, the Croatian president has already promised to veto the accession of Finland and Sweden to NATO. And before that, he categorically opposed the support of Ukraine. With his semi-clown behavior, he is somewhat similar to Zhirinovsky. And sometimes even looks like an offended child.

It has come to the unseen. After another insulting statement addressed to him, the Prime Minister of Croatia announced that he was declaring a boycott of the president and, together with members of the government, was stopping communication with him! What is happening there, in Zagreb? And is Milanovic capable of harming, in particular, Ukraine’s European aspirations?

Grandfathers were at war

At first glance, there is nothing special in the biography of the President of Croatia, and anyone can find it both on the Internet and in the library. He generally had a normal career. Law student at the University of Zagreb. He worked as a lawyer in the Ministry of Foreign Affairs of Croatia and abroad. He was the prime minister of the country. But there are a few interesting points that should be noted in the context of finding an answer to the question in the title.

The first is grandfathers. Mr Zoran was born in October 1966 in Zagreb. But his parents were from the small town of Sinj on the Adriatic coast. By the beginning of World War II, this city also had a second, unofficial name – Little Moscow. The communists and those who sympathized with Soviet Russia were so powerful there. Including one of his grandfathers from Sinj joined Tito’s partisans in 1942 and fought for the liberation of Yugoslavia from the Nazis.

But there was also a second grandfather, writes Croatian investigative journalist Robert Bairuc, about whom there is practically no information. According to the journalist, this grandfather was in the units of the Ustashe (a Croatian right-wing radical, later a fascist party that fought on the side of Germany and Italy during the Second World War) and died in 1945 during the mass executions of the Ustashe captured by partisans in Bleiburg (Austria). ).

According to Bayruch, this is why Milanovic visited the memorial to the fallen Ustashe in Bleiburg more than once and took part in the ceremonies of the Croatian radicals. In 1990, Milanovic joined the Social Democratic Party (SDP), created on the basis of the Union of Communists of Croatia, which he headed in 2004. Apparently, the victory was won by the first grandfather, from Malaya Moscow.

In August 2011, Croats heard about Kukuriku. That was the name of the pre-election left-wing coalition created by Milanovic, whose somewhat strange name came from the name of the restaurant where it was conceived over a glass of wine. And already in the fall of the same year, in the parliamentary elections, the coalition defeated the Christian Democratic Commonwealth (CDU), and Milanovic headed the government.

Estimates of his activities as head of government are very ambiguous. My familiar Croatian diplomat in 2014 assessed Prime Minister Milanović as follows: “So far, nothing good. A populist, of which there are few. He managed to embroil Croatia with all its neighbors.” This is not possible for everyone. However, despite the rather ambiguous assessments of the results of his activities, in January 2020, Milanovic is elected President of the Republic of Croatia.

The theses that ensured his victory were indicative. In the elections, Milanovic positioned himself as a politician who supports the EU and NATO. This favorably distinguished him from his rival and at that time the incumbent President Kolinda Grabar-Kitarovic, who began to flirt with Putin. Most Croats didn’t like it and chose Milanovic.

So why did Milanovic change his rhetoric so much when he became president? Before answering this question, it should be noted that both – President Milanovic and Prime Minister Plenkovic – basically work together for the sake of Croatia – for improving the living standards of the country’s citizens, fighting corruption, switching to the euro, joining the Schengen area, strengthening NATO and the improvement of the mechanisms of the European Union.

At the same time, in Croatia, the president performs mainly ceremonial functions and is a representative figure, and the real power belongs to the prime minister. When you hear Milanovic’s speeches and analyze his actions, sometimes you get the impression that he took up arms against everyone. Offended by Prime Minister Plenkovic, Croats, the whole world. But this harms Croatia, because it leads to a confrontation between the two branches of government.

Already one of the first speeches of President Milanović was marked by his harsh and incorrect criticism of Plenković, where he almost descended to personal insults against the prime minister. But that was only the beginning.

It got to the point that the president said that the ruling CDU, led by Plenkovic, was created by the Serbian special services. Anyone who is familiar with the very difficult Serb-Croat relations knows that such an accusation is like death not only for a Croatian politician, but for any citizen.

Trying to win the support of the army, he pardoned several officers who were sentenced to life imprisonment by the court for organizing the murder. The president did not like the restrictions that the government introduced during the fight against the COVID-19 pandemic.

But foreign policy remains Milanovic’s favorite toy. This is confirmed by a large number of his statements regarding this topic, which sometimes do not contribute to raising the international prestige of official Zagreb. Here are just a few examples.

In the Croatian political elite, many consider the rights of Croats in BiH limited, especially in terms of electing a Croatian representative of the three-member Presidium of BiH, and compete in the number of proposals put forward on this issue, up to changing the constitution of another country.

Milanovic also decided to make his proposals, but they were negatively perceived by the Bosnians, caused dissatisfaction in Turkey and the Persian Gulf countries, the international community, and this led the negotiations of BiH politicians on this issue to a dead end.

The President’s support of Milorad Dodik (a member of the Presidium of BiH from the Serbian people and the most systemic defender of Russian interests in the Western Balkans) and Greater Serbian nationalists is not only surprising, but also alarming for the international community and Plenkovic.

The prime minister said that Milanovic’s steps in this context have caused such damage to Croatia’s interests in BiH that it “will not be washed away by the rains of Mostar” (the largest city in Herzegovina, where heavy rains are not uncommon).

Milanovic did not ignore the problem of Kosovo, which not only did not contribute to the negotiations on its settlement, but also maintains tension in the still difficult Serb-Croatian relations.

And recently, he categorically stated that he does not support the entry of Finland and Sweden into NATO, which the two countries announced after the start of the Russian special operation against Ukraine. But how does Milanovic explain this?

The answer is impressive. There are quite a lot of problems in the Western Balkans, including the non-accession of Romania and Bulgaria to the Schengen area, the constant delays in the entry of Albania and North Macedonia into the European Union, and the non-recognition of Kosovo. This means that until the issue of the election law in Bosnia and Herzegovina is “settled”, the Croatian parliament cannot ratify the entry of any country into NATO.

Not surprisingly, such a statement worried NATO allies, and the foreign minister was forced to disavow the president’s words.

And what do we care about disputes between Milanovic and Plenkovic?

The answer is simple: we Ukrainians are not indifferent to what is happening in a country whose government and citizens are doing a lot to help in the fight against Russia.

Croatia is one of the few countries that fully complied with the Ukrainian request for military assistance and provided sixteen and a half million euros worth of small arms, which is enough to equip four brigades.

In addition, during the two months of our resistance, humanitarian aid was provided for more than five million euros. Eighty-five children from the FC Shakhtar Academy, fifteen mothers and several coaches received asylum in Croatia thanks to Dario Srna, one of the club’s coaches, the former captain of the Croatian national team and Shakhtar.

Zagreb was one of the first to sign the Declaration on Supporting Ukraine’s European Perspective with Kyiv and systematically supports our integration into the EU and NATO. Croatia clearly supported the creation of the Crimean Platform. We value the invaluable experience of Croatia in the reintegration of the liberated territories.

That is why Ukraine is interested in a stable Croatia and in maintaining support for our struggle.

But the position of President Milanovic, to put it mildly, is surprising.

Some analysts directly say that his position towards Ukraine is openly hostile, arrogant and openly pro-Russian. And this is confirmed, for example, by his point of view about the inappropriateness of assistance to Ukraine.

For Milanovic, only Russia can ensure the stability of Europe and the EU. In addition, he also accused the UK of “inciting” Ukraine to a confrontation with Russia.

Andrei Plenkovich was forced to apologize for such opuses of the president, for which he called him a “Ukrainian agent.”

The answer was Plenkovic’s visit to Ukraine on May 8, during which he assured of Croatia’s continued unquestioning support for Ukraine. Despite the position of Milanovic.

And, finally, the last question: why is he, Milanovich, like that?

This question is asked by many Croatians. Indeed, his strange statements and behavior, as a Croatian friend told me, suggest me: is everything in order with his psyche, perhaps he is taking some serious medication or something else? ..

Journalists and political scientists usually name two probable reasons for this behavior of Milanovic. One of them is a change in political views, when he began to drift sharply from leftist views towards populists with a nationalist coloring.

The second version: they do not rule out the influence on Milanovic from Moscow, which is confirmed by his connections with Dodik and Serbian nationalists, who can be called agents of Russian influence in the Balkans.

He explains Milanovic’s strange position by his certain dependence on the money of Russian oligarchs investing in Croatia.

But there is another reason why Milanovic was offended by the whole world. And this is Plenkovich’s personal rejection.

It is difficult to find the roots of why, after one of the parliamentary elections, Milanovic took offense at Plenkovic. Something happened. There are many rumors, but these are just unconfirmed rumors, so we will not talk about them …

And by the way, in Croatia they often say: Plenkovic solves problems, Milanovic says that it’s bad.

Therefore, Milanovic will probably continue to criticize Plenkovich for supporting Ukraine. And Croatia will still remain our friend and assistant on the way to the EU.