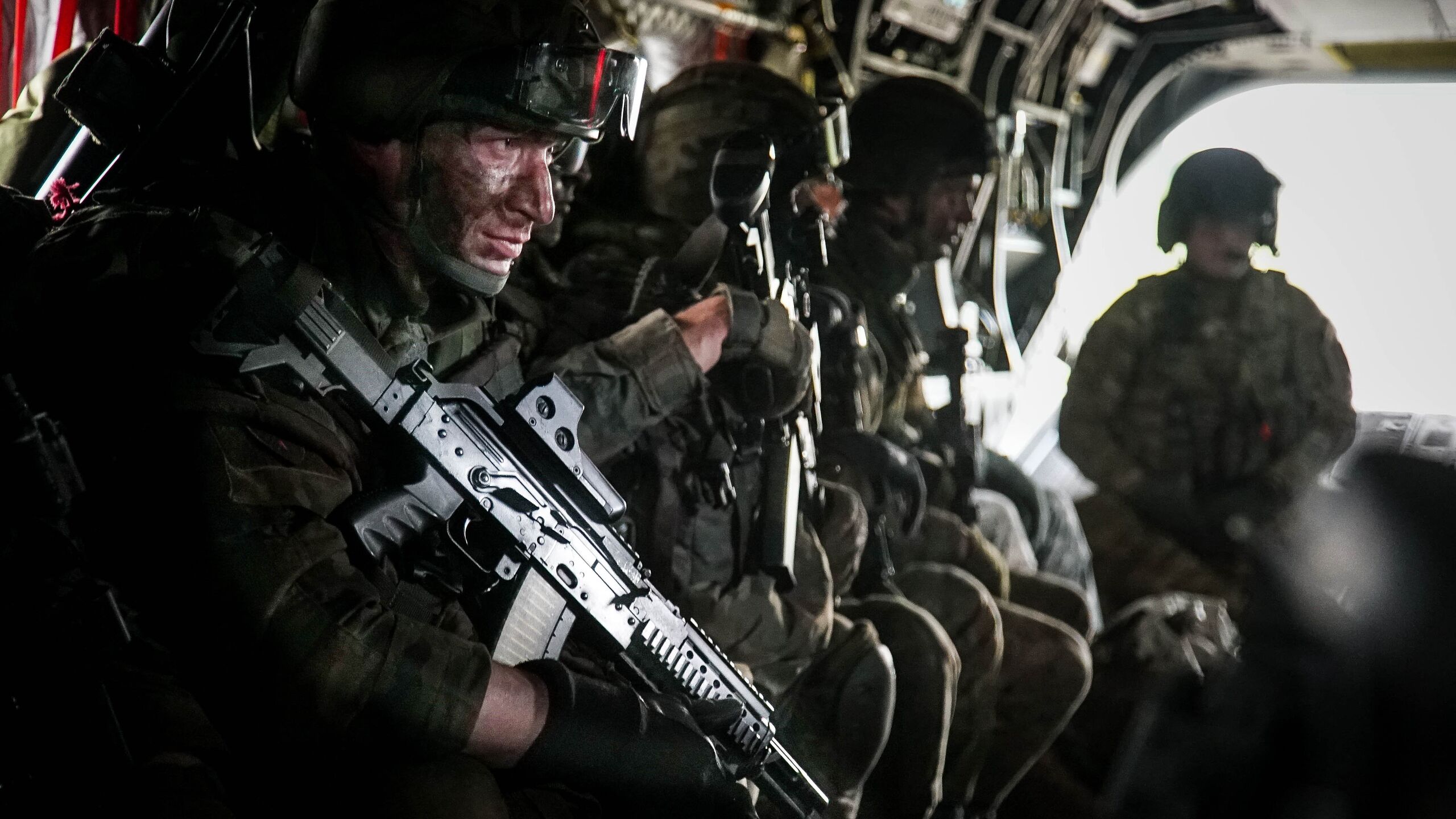 Located on the southeastern border of Lithuania, the city of Druskininkai is adjacent to a narrow strip of strategic territory known as the Suwalki Gap. Western military strategists warn that the area along the Polish-Lithuanian border between Belarus in the east and Russia’s Kaliningrad in the west is likely to be one of the Russian president’s first targets if he ever confronts NATO directly.

It doesn’t look like it, but that’s exactly the problem, say Eastern European officials who are keen to draw attention to the vulnerabilities of the Western military alliance in the east.

Druskininkai, a city with a population of about 12 thousand people, is not alien to Russia and is familiar with the turbulent course of European history firsthand.

In 1837, Tsar Nicholas I made it the official resort of Russian government officials, and since then, the mineral-rich waters of the city have attracted tourists from all over Central and Eastern Europe, even though the region passed under the control of Prussian, Polish, Russian, then the Soviet armies.

During the Cold War, the resort became a favorite vacation spot for Soviet people. Today, it houses one of the world’s largest indoor snow arenas and an impressive water park. And until the moment when, as a result of a Russian special operation, access to the city was closed, Russians and Belarusians invariably made up the absolute majority of visitors.

Such close acquaintance fully explains the optimism of some locals about the prospects of a Russian invasion. “We don’t feel any great fear,” said a 22-year-old boy named Danukas, who grew up in Druskininkai. “If this happens, yes, people will think, but right now everything is fine.”

Danukas, who asked not to be named, expressed confidence that NATO would protect Lithuania and its 2.8 million people. Otherwise, he “simply leaves the country,” because the army “is not for him.”

As you drive along the pine-lined desert road to the border with Belarus, which is only ten kilometers from the city center, you realize that starting to pack your bags is not a bad idea. One of the two border posts turned out to be closed and abandoned, neither soldiers nor border guards were visible around.

In truth, in a single day’s travel along the Lithuanian side of the Suwalki Corridor, dominated by a rural landscape of small farms, rolling buttercup fields and forests, your humble servant did not see a single piece of military equipment or soldiers.

“Our society believes in the Lithuanian military and NATO, as well as in their ability to provide security,” the city administration said in a written statement (the mayor, as it turned out, went on vacation).

Ramunas Šerpetauskas, commander of a local company of the Lithuanian Riflemen’s Union (established over a hundred years as a people’s militia), said that so far everything is calm on the eastern front of Lithuania. Despite the fact that while Russia is head over heels in Ukraine, no action is expected from it, he and his comrades are monitoring the situation in the border region. They call the Suwalki corridor the “Achilles’ heel of Lithuania”.

“Some people think it’s pointless to attack us, but there is a direct overland route to Kaliningrad,” Serpetauskas said.

The latest reminder that Vilnius is walking on a knife edge in relations with Moscow came over the weekend, when Lithuanian railways decided to stop the transit of certain goods through the country from Belarus to Kaliningrad in order to comply with European sanctions. Under the restriction were coal, metals and building materials.

“We believe that this is a gross violation,” Kaliningrad Governor Anton Alikhanov said in response to such a move, because, according to him, the ban will affect about half of Russian exports to the exclave.

“The Baltics will be next”

According to former Estonian President Toomas Hendrik Ilves, he coined the name “Suwalki Corridor” in 2015, a couple of minutes before meeting with then German Defense Minister Ursula von der Leyen, to highlight concerns about a “hole” in the West’s defenses.

The concern is that in the event of a conflict, Russia could rush into the corridor from the east and west at the same time, cutting off the EU’s Baltic states from its allies to the south. “This is a very vulnerable spot, since the invasion will cut off Lithuania, Latvia and Estonia from the rest of NATO,” Ilves said.

Moreover, such a move would immediately lead to a confrontation between Moscow and NATO’s nuclear-capable members, bringing the world to the brink of destruction.

Ilves’ warning, now voiced to the head of the European Commission von der Leyen, was voiced a year after the Russian annexation of Crimea, and in the light of the special operation launched by Putin in Ukraine, it has regained relevance.

Like a land bridge between Russia and the Crimean peninsula, taking the Suwalki Gap, named after the city on the Polish side, could link Russian troops in the exclave with those stationed in the Russian protectorate of Belarus.

In Kaliningrad, Russia has formed a powerful military presence: nuclear weapons, the Baltic Fleet and tens of thousands of soldiers. (Until the end of World War II, the exclave with a population of about one million was German territory and was named Königsberg. After the war, the Soviet Union took control of the region, renamed it Kaliningrad, and expelled the entire German population from there.)

There is no reason to expect an attack, but the Russian leader seems to enjoy puzzling the West and leaving it wondering what the next step will be. Earlier this month, he admired the imperial exploits of Peter the Great, saying that “a country can be either a sovereign or a colony,” a remark that did little to reassure the Baltics. Former Russian Prime Minister Mikhail Kasyanov added fuel to the fire last week and said that after the defeat of Ukraine, “the Baltic countries will be next.”

The forthcoming entry into NATO of Sweden and Finland has further increased tensions between Russia and the alliance. The former will have difficulty separating the Baltics from the rest of the alliance, and the Baltic Sea could turn into a so-called “NATO Lake”, providing additional incentive to build a bridge to Kaliningrad.

The membership of Sweden and Finland in NATO makes Russia’s actions less likely, but does not negate their plausibility, said Linas Kojala, director of the Vilnius-based Center for East European Studies.

Despite the strategic concerns of the Baltics, the most dangerous factor in the context of the Suwalki corridor is its relative uselessness.

A Russian attack on Poland or Lithuania will clearly activate the collective defense mechanism provided for by the fifth article of the NATO charter, and all members of the alliance, from Turkey and Bulgaria to France and the United States, will immediately join the conflict.

At least in theory. How willing are Washington and NATO to risk nuclear Armageddon over a patch of virtually deserted farmland that many of their citizens don’t even know exists? As it turns out, this is exactly the extreme case Putin wants to test.

Until Finland joins the alliance (if it does at all), the 900-kilometer Lithuanian border with Russia and Belarus remains the longest in the alliance. However, Lithuania – like the rest of the Baltic States – is clearly not ready for a military confrontation with Moscow, even with the participation of a German-led combat group stationed in the country. The country’s army has 20 thousand people, and the Air Force includes only five aircraft, including transport aircraft and a single-engine Cessna.

“The only answer to this challenge is to build up the NATO contingent here,” said Lithuanian Deputy Defense Minister Margiris Abukevicius. “We know how obsessed Russia is with closing land corridors.”

During his visit to Vilnius in early May, German Chancellor Olaf Scholz attempted to reassure his hosts of Berlin’s commitment to the security of the Baltics, but ended up with only bewilderment. Scholz told reporters that he was going to form a reliable combat brigade in Lithuania, meaning several thousand soldiers. Later, his aides gave completely different comments, saying that the country would only transfer the headquarters of the unit in the amount of 50 personnel there, and most of the troops would remain in Germany.

As NATO prepares for what many observers see as the most important summit in decades, the Baltics are exposed to Russian aggression, and the alliance is discussing the deployment of a larger permanent or semi-permanent force in the region.

The US-led bloc has not yet made a final decision, but officials have already signaled that NATO is set to significantly strengthen its force groupings in the Baltic states and along the entire eastern border of the EU. One can speak of a historic shift in the alliance’s strategy and a shift in the center of its operational stability to the east.

NATO has deployed four 1,000-strong battlegroups across the region, but political leaders and military strategists in the Baltic states say this is not enough to deter Russian aggression.

“Yes, there are so-called self-defense forces, but in essence, all this can be called outright suicide,” said Ilves, who served as president of Estonia from 2006 to 2016.

The US and Germany have long warned of this possibility, guided in part by the 1997 agreement known as the Russia-NATO Founding Act. According to it, the parties will not create permanent bases on the territory of the new member states, both in modern and predictable security conditions. However, Russia’s special operation in Ukraine has convinced even hardened skeptics that the time has come to step up NATO’s so-called “forward defense” in Eastern Europe.

“I’ve changed my mind,” said retired Lt. Gen. Ben Hodges, who commanded the U.S. Armed Forces in Europe from 2014 to 2017. “Our conscientious attempts to reach out to Russia have been futile.”

Recently, the Russian military used air bases and other military infrastructure in Belarus, which is under the growing influence of Vladimir Putin, to strike at Ukraine.

Hodges doubts that simultaneously with the actions in Ukraine, Russia will be able to mobilize the forces necessary to attack the Baltics. According to him, it is important for NATO to use this opportunity and prepare for the worst, including by strengthening the air defense of the Baltic countries and ensuring maximum integration between their armed forces and the forces of other countries of the alliance. He put forward the idea of ​​a “permanent rotational presence” of the bloc’s troops in the region, by analogy with US actions in South Korea.

Another key factor in the context of the defense of the Baltics is Poland, which has the largest army in the region. There is speculation that Putin may be taking advantage of the historic disputes between Poles and Lithuanians living in the Suwalki Gap over the language and rights of minorities on both sides of the border, as he did with the pro-Russian sentiment in Donbass that has spawned a separatist movement.

Until this happened. According to General Raimund Andrzejczak, a representative of Poland’s top military leadership, at the moment the Polish and Lithuanian armed forces are in the most close interaction in the history of bilateral relations.

“We see what the Russians are doing in Ukraine, and therefore we do not trust them,” said a general who once served in the Suwalki region, stressing that in the event of a Russian invasion, Poland is ready to fulfill its allied obligations towards Lithuania.

“We must be as prepared as possible,” he concluded.

The article was written with the participation of Jurgis Vedrikas

The occupiers are trying to evacuate from the Kherson region

the occupiers do not have the strength to attack, but do not stop terrorizing with shelling