Italian Foreign Minister Luigi Di Maio has announced that he is leaving his 5 Star Movement party, which he previously accused of “immaturity” due to the refusal to supply weapons to Ukraine. Together with Di Maio, some of its other members left the party and it is no longer the largest political force in the Italian parliament. This was reported by the Italian edition Corriere della Sera.

“This is a painful choice that I never thought I would have to make. I and many other colleagues and friends of mine are leaving the 5 Star Movement, which from tomorrow will no longer be the leading political force in Parliament,” Di Maio said at a press conference on June 21.

Di Maio added that he would form a new parliamentary group that would support the policies of Prime Minister Mario Draghi’s government and, in particular, his vision that Ukraine needs weapons to defend against Russian aggression.

“We must definitely choose which side of history to be on – on the side of Ukraine, which was attacked, or on the side of the aggressor Russia. The positions of some M5 leaders risked weakening our country,” Di Maio also quotes the publication.

The fact that Luigi Di Maio supports Ukraine is evidenced by the main photo on his page in Facebook. It was made in the building of the Ministry of Foreign Affairs of Ukraine, where Sofia Kyiv is visible in the background and Di Maio is standing next to Dmitry Kuleba. 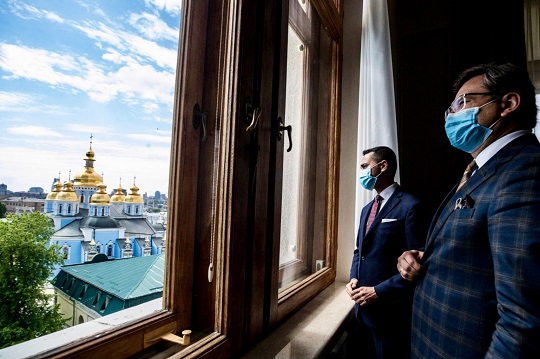 So far, the 5 Star Movement has been the biggest political force in the Italian Parliament. The party gained 33% in the last elections. Due to disagreement with the party’s position on supporting Ukraine, more than 60 deputies left it and joined the new Di Maio group. Thus, out of 227 parliamentarians from this party, more than a quarter went over to the new political force and support the government of Mario Draghi.

Recall that last week the Prime Minister of ItalyMario Draghi, together with the leaders of Germany, France and Romania, visited Kyiv and Irpin. During a press conference in Kyiv, he stated that “the world should be the way Ukraine wants it, and it should be lasting.” Before back in April the Italian government led by Draghi almost unanimously decided to transfer weapons to Ukraine.

woman wounded during shelling of Zhuravlevka dies in intensive care

In Mariupol, occupiers forbid schoolchildren to speak Ukrainian even during breaks – mayor’s adviser

Why Biden does not give the ATACMS system, Putin tries on the mask of Peter I. Western media review – Ukrainian news, Politics