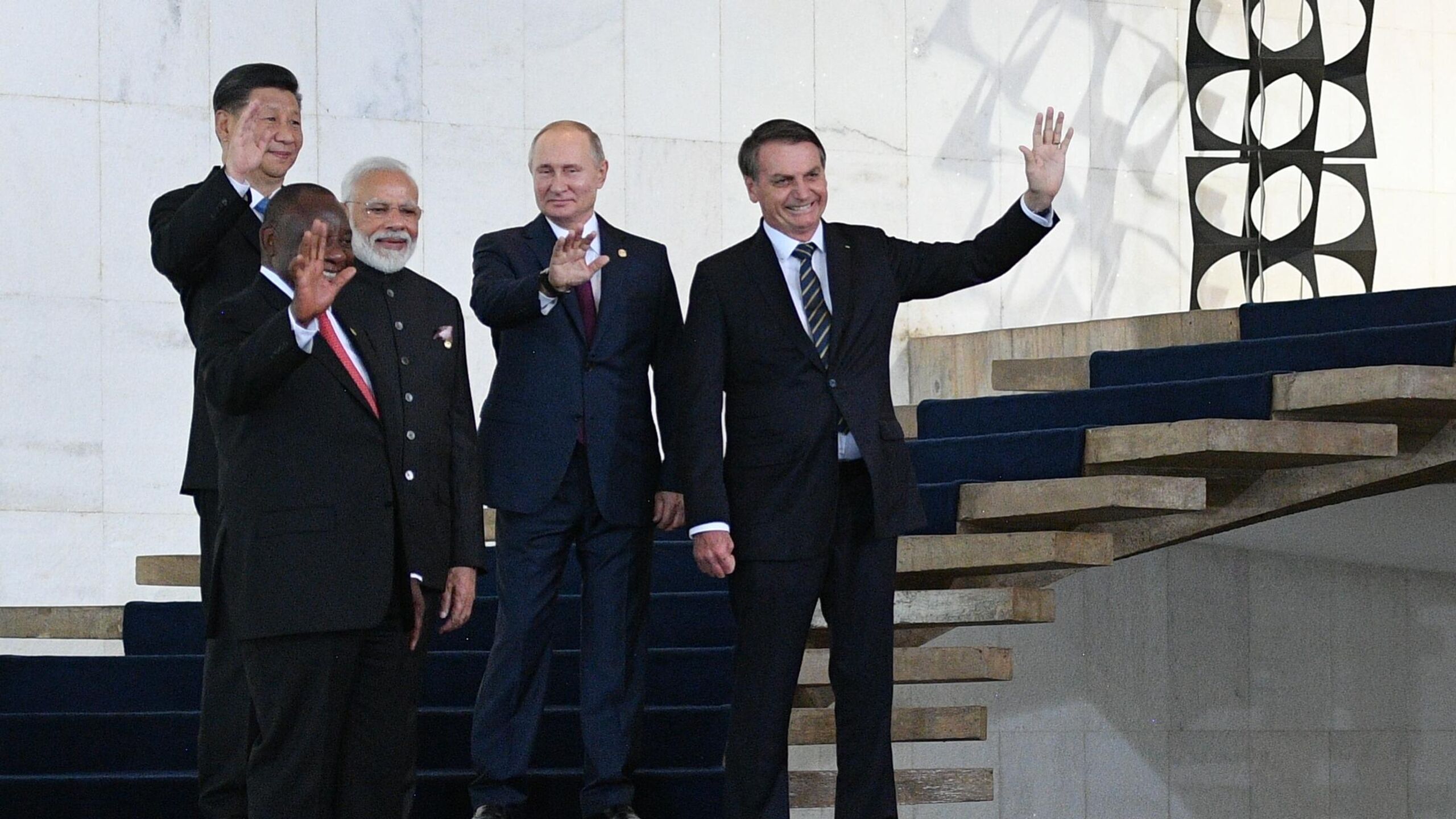 – On Thursday, June 23, a virtual BRICS summit will be held, which this year is being organized by Beijing. For Russian President Vladimir Putin, this will be the first international forum with the participation of the heads of major economies since the start of a military special operation in Ukraine in February this year.

For Putin, this will be an extremely pleasant event: his smiling face will appear on the same screen along with images of the leaders of the BRICS countries – Chinese President Xi Jinping, Indian Prime Minister Narendra Modi, Brazilian President Jair Bolsonaro and South African President Cyril Ramaphosa. This will be a signal that, despite sanctions and attempts by the West to punish Moscow for the special operation in Ukraine, Russia is not alone.

This message may be made even clearer by the fact that a few weeks before the start of the Russian special operation, Beijing and Moscow declared their bilateral relationship to be “limitless”. It is also important that the leaders of the BRICS countries did not openly condemn Russia for its actions in Ukraine, although they still try not to publicly support its actions so as not to quarrel with the West.

Meanwhile, the sting operation could spell additional trouble for the BRICS, a group of large emerging economies that has been around for more than a decade and is already struggling with a lack of trust among its members and diverging ideologies.

However, the group still decided to hold the 14th Leadership Summit. According to experts, this reflects the view of the BRICS countries on the world order and, as a result, on the situation with Ukraine, which does not correspond to the position of the West.

“We are talking about several extremely large economies whose leaders are ready to be seen with Putin, even if it happens on a virtual platform,” explained Sushant Singh, senior fellow at the Center for Policy Research think tank. (CPR) in New Delhi.

“The fact that Putin is welcomed, that he is not an outcast, that they do not turn away from him, is a huge plus for the Russian leader,” he added. According to him, it is also important that this is a “scheduled meeting, which is held every year and will take place this year too.”

While the BRICS might say that engaging with Russia is still better than not engaging with it, the picture becomes clearer in contrast. A few days after the BRICS summit, the leaders of the block of the world’s leading developed economies, the G7, will meet, which unanimously condemned Russia’s actions and excluded it from its ranks after the annexation of Crimea in 2014.

Unlike the G7, the BRICS countries during the summit on Thursday, June 23, will try to act with great caution on the issue of Ukraine and, most likely, will limit themselves to statements about the need for a peaceful settlement of the conflict. Perhaps, observers say, BRICS leaders will gently urge Western countries to analyze the impact of their sanctions on the global economy.

Beijing, which is organizing the meeting this year, is economically the strongest of the five BRICS members (they account for about a quarter of global GDP). There is an opinion that he will try to focus the attention of the participants on the key points of his own agenda, in particular, to promote new initiatives in the field of global development and security, as well as to counter the attempts of the United States to create its own “bloc”.

The BRICS countries should “strengthen mutual political trust and cooperation in the field of security,” coordinate their actions on major international and regional issues, take into account each other’s key interests, and “oppose hegemonism and power politics.” Xi spoke about this during a speech to the foreign ministers of the BRICS countries in May. He called on the group to promote development at a “time of upheaval and transformation”.

Today, the world is facing various crises, including food shortages and a growing debt crisis. It is precisely such problems that the BRICS group, created in 2009 as a tool for “implementing the common interests of developing market economies and countries,” must solve precisely.

Since its formation, the group, which South Africa joined in 2011, has unanimously called for greater representation of large emerging economies on the world stage and opposed what it sees as disproportionate dominance by Western powers. The BRICS countries insisted on reforms in the International Monetary Fund and the World Bank, and sometimes even allowed themselves veiled criticism of NATO’s actions.

Within the group, the issue of using the national currencies of the participating countries in trade between them was also discussed. Now this topic may come to the fore, given the sanctions imposed by Western countries against Moscow. Shahar Hameiri is a professor and political economist at the University of Queensland, Australia.

The sanctions deprived the Central Bank of Russia of the ability to conduct most transactions in dollars, affected many banks and cut off the country’s major institutions from international banking systems. As a result, states that continue to do business with Moscow are forced to find ways to get around the restrictions. Both India and China remain major buyers of Russian energy.

“During the summit, we will not hear any strong support from Russia, there is no doubt about it. I am sure that there will be many awkward moments during the meeting. However, despite the awkwardness, de-dollarization is an area where the interests of the governments of the BRICS countries do coincide” Khameiri explained.

“Any meaningful move away from the dollar system will potentially go a long way.”

Despite some common interests, the BRICS group has long faced a lack of cohesion, as there are serious divergences between the political and economic systems of its members, as well as their geopolitical interests.

In addition, the difficulties associated with the Russian special operation in Ukraine could blur the outcome of the upcoming summit, despite the fact that the countries of the group, with the exception of Brazil – and Russia – abstained during the vote on the resolution of the General Assembly, which called on Moscow to immediately withdraw troops from Ukraine and supported by 141 countries.

For its part, China has accused NATO that the alliance itself provoked a special operation in Ukraine. Similar rhetoric was heard in public discussions in India. In South Africa earlier this year, Ramaphosa told lawmakers that hostilities could have been avoided if the NATO alliance had heeded warnings about Kyiv’s membership in the military bloc.

And although Brazil voted at the UN to condemn Russia for its actions against Ukraine, Bolsonaro still hedged himself, saying a few days earlier that his country would maintain a “neutral” position.

According to Alexander Gabuev, an analyst who specializes in Russia-China relations, under normal circumstances, Beijing would act in the usual way: it would characterize the BRICS groups as “a kind of soft alternative to the G7” and would try to “portray it as the leader of the developing world in its opposition to club of wealthy capitalist democracies”. Gabuev added that its members would also support each other’s key projects.

“Now it’s more difficult to do that because of Putin’s presence at the summit,” added Gabuev, who is a senior fellow at the Carnegie Endowment for International Peace.

Meanwhile, a long-standing source of internal friction within the BRICS persists. We are talking about tensions between India and China, which in 2020 escalated into a violent clash on the border.

On the one hand, the group serves as “a vehicle for some engagement between India and China,” says CPR’s Singh. And now this is very important, because New Delhi does not want to provoke Beijing, especially since India, along with the United States, Japan and Australia, formed the Quad group, and Washington considers it an important element of its strategy to confront China.

However, it is precisely because of these ties that New Delhi is likely to show marked reticence in supporting the most important outcomes of the upcoming meeting.

“I will be surprised if any substantive initiative is announced at the end of the BRICS summit, because in this case, India will send a signal to the Quad group and its Western partners that they are ready to work very closely with China and Russia,” Singh explained. will greatly complicate the situation of India.”

Another question is how other BRICS members will react to the proposal to expand the bloc to include other developing countries. This issue has been discussed for a long time, and Beijing will most likely raise it at the summit.

At a meeting with his BRICS counterparts in May, Chinese Foreign Minister Wang Yi urged the group to start an “expanding process” of the list of member countries.

Such a move could reinforce the view of some players that the West is showing double standards when it comes to complying with international norms, said Gabuev of the Carnegie Endowment. It is this perception of Western action that fuels arguments that the developing world needs to formulate these norms, he says.

“The admission of new countries to the ranks of the BRICS will give legitimacy to the decisions of the group, but I am not sure that at this stage this process can go beyond symbolic gestures,” he added.

Reznikov: The fleet of 155-mm artillery is replenished – the Armed Forces of Ukraine have already received the M109 self-propelled guns – news of Ukraine, Politics