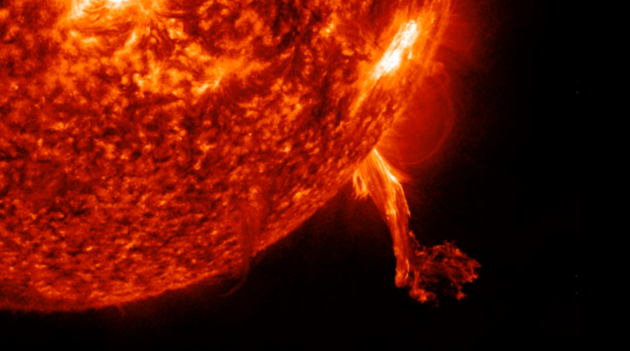 At the end of 2021, operators of the European Space Agency’s (ESA) Swarm satellite cluster noticed something strange: vehicles that measure the Earth’s magnetic field began to plunge into the atmosphere at an incredibly high speed, up to 10 times faster than before. These changes coincided with the start of a new solar cycle, and experts fear that the next few years will be very difficult for spacecraft. space.com.

“Over the past five or six years, the satellites have been sinking about two and a half kilometers a year. But since December last year, they have practically dived. The sinking rate from December to April is 20 kilometers per year,” said Anja Stromme, Swarm mission leader.

Read also: A powerful “long-playing” flash was recorded on the Sun

Satellites that orbit close to Earth always encounter atmospheric drag, which slows the spacecraft down and causes it to fall back to the planet. Normally, satellites do not survive re-entry into the atmosphere and burn up in it. This atmospheric drag forces International Space Station controllers to perform regular maneuvers to keep the station in orbit at 400 kilometers above Earth.

Scientists know that the intensity of such resistance depends on solar activity – the amount of solar wind emanating from the Sun, which varies depending on the phase of the solar cycle. The last cycle, which ended in December 2019, was fairly calm, with fewer than usual sunspots and an extended low in activity.

But last fall, the star began to wake up, spewing more solar wind and more sunspots, flares and coronal mass ejections. And the upper layers of the Earth’s atmosphere are already feeling the consequences of this.

“There is a lot of complex physics going on in the upper atmosphere, where it interacts with the solar wind, that we still don’t fully understand. We know that this interaction causes the atmosphere to rise. This means denser air is moving up to higher altitudes,” Stromme said.

Denser air means higher resistance for satellites. Even though the density is still incredibly low at about 400 kilometers above the Earth, its increase is enough to actually cause some satellites in low orbits to fall.

“It’s almost like running against the wind. It’s more difficult, it’s resistance – that’s why the satellites slow down, and when they slow down, they sink,” Stromme added.

The situation with the bottom two became so dangerous that by May, operators had to start raising the satellites with onboard thrusters to save them.

The Swarm faction is not the only one that has suffered from worsening sunny weather. SpaceX has lost 40 Starlink satellites that were hit by a magnetic storm shortly after launch. During such storms, satellites fall into lower orbits. The lower the satellite’s orbit when the storm starts, the greater the risk that the satellite will not be able to recover.

Starlink satellites are in orbit around 550 kilometers, which is well above the danger zone, but immediately after launch they are much lower, at an altitude of about 350 kilometers above the Earth, and then rise. SpaceX believes that this approach has advantages, because if any satellite is faulty, it will quickly burn up in the atmosphere, and not turn into a new piece of space debris. But with worsening space weather, such satellites will be vulnerable to new flares.

All satellites in orbit within 400 kilometers would be at risk, Stromme said. This also applies to the ISS. By coincidence, the height of the new cosmic revolution fell on a minimum of solar activity, most satellites are experiencing their first solar maximum. More importantly, the Sun is now behaving more aggressively than models predicted, with more sunspots, coronal mass ejections and solar wind streams hitting our planet.

However, some experts see positive aspects in this. They believe that an increase in solar activity could help clear the Earth’s orbit of space debris.

Recall On April 25, a double flare occurred on the Sun. It resulted in a short radio outage over Asia and Australia.

War in Ukraine – At least 3,000 dolphins have died in the Black Sea due to Russian invasion

How to learn to live in a war

Ukrainian grain. Kuleba asks not to step on a rake with Putin, recalled Macron, Scholz – news of Ukraine, Politics