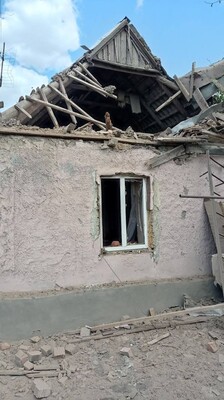 Russian troops fired again Dnipropetrovsk region. There are destructions in the Great Kostroma. About it informed head of the OVA Valentin Reznichenko.

“Dnepropetrovsk region. In the Krivoy Rog region, it is restless again. The enemy fired several times at two communities – Apostolovsky and Zelenodolsk,” the report says.

According to the head of the OVA, no people were injured as a result of the shelling.

“There is destruction in Velikaya Kostroma. There is no electricity in the village. It is calm in other parts of the region at this moment,” Reznichenko added.

Head of the Dnepropetrovsk Regional Council Nikolai Lukashuk clarifiedthat there is no electricity and gas in Velikaya Kostroma as a result of night shelling.

“The invaders fired on the Zelenodolsk community. As a result of night shelling, there is no electricity and gas in Velikaya Kostroma – communications are interrupted. Fortunately, no casualties. How many houses were under enemy fire at night and were damaged is difficult to say now, specialists still have to examine the place,” Lukashuk said.