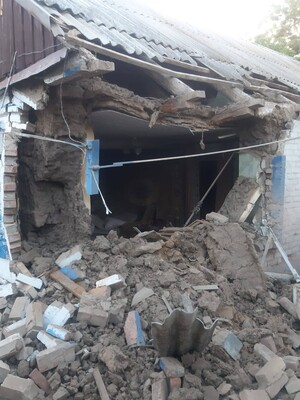 According to the head of the OVA, the enemy treacherously hit residential areas.

“Two people were wounded in Apostolovoye. They were hospitalized,” Reznichenko added.

The head of the OVA specified that as a result of the shelling, there is destruction of housing, the city is partially without electricity and water.

In addition, cluster munitions remained on the streets and yards after the shelling. Rescuers took people to safe places, pyrotechnics work. To date, 16 cassette elements have already been discovered.

The head of the OVA urged local residents to be prudent and under no circumstances touch suspicious objects.

Read also: Russian troops hit the Dnepropetrovsk region again: there is no electricity and gas in Velyka Kostroma

Earlier it was reported that the Russian troops carried out another rocket fire on the territory of the Dnepropetrovsk region – the invaders got into the oil depot in the Novomoskovsk region. The impact caused a huge fire.

Merkel: "I’m not to blame for what happened between Russia and Ukraine"