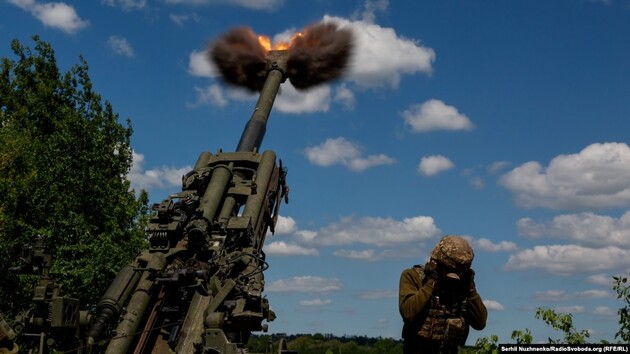 John Lennon’s megahit Imagine has always been a hugely popular song for the wrong reasons. Imagine that the world will live as one (“the whole world lives in unity”) is the best way to end up in hell.

Those who cling to pacifism in times Russian attack against Ukraine, remain trapped in their own version of Imagine. Imagine a world where conflicts are no longer resolved by guns… Europe existed in this Imagine world, ignoring the harsh reality beyond its borders. It’s time to wake up. About this in an article for The Guardian writes the Slovenian philosopher Slavoj Zizek. The dreams of a quick Ukrainian victory, as well as the original dreams of a quick Russian victory, have come to an end. In what looks more and more like a long stalemate, Russia is gradually moving forward. And its ultimate goal is clearly declared. No more reading between the lines when Vladimir Putin compares himself to Peter I.

“Fighting against Sweden, he took something away from her … But he did not take anything away, he returned it. He restored and strengthened, that’s what he did. It is obvious that now it is our turn to return and strengthen“, Putin said.

Instead of focusing on specific issues (what is Russia “returning” and where?), it is better to look more closely at the general justification for his encroachments: “To claim certain leadership, and I’m not talking about global leadership, but leadership in every area , every people, every ethnic group must have sovereignty. Because there are no intermediate countries. They are either sovereign or colonies, and it doesn’t matter what the colonies are called.” The essence of this thesis of the Russian autocrat is clear: there are only two categories of countries: sovereign and conquered. According to Putin’s imperialist vision, Ukraine should fall into the second category. And according to Russian official statements over the past few months, Bosnia and Herzegovina, Kosovo, Finland, the Baltic States, after all, all of Europe “belong to the second category.”

Read also: Forbes: The world is tired of sympathizing with Ukraine, but the war continues

Now everyone knows what it means to “save face” Putin. This means agreeing not just to a small territorial compromise in the Donbass, but to agreeing to its imperial ambitions. The reason why these imperial claims should be rejected without hesitation is that in today’s global world, in which all countries are intermediate, that is, not sovereign, but not conquered either, cannot insist on full sovereignty. Because such a requirement in times of global warming is absolute madness. After all, the survival of all is critically dependent on close global cooperation. But Russia is not just ignoring global warming. Why was she so furious when the Scandinavian countries wanted to join NATO? In times of global warming, track control in the Arctic is at stake. That is why at one time Donald Trump wanted to buy Greenland from Denmark.

Due to the rapid development of China, Japan and South Korea, the main transport routes will lie north of Russia and Scandinavia. The Russian strategic plan is to capitalize on global warming, control the world’s main routes, and develop Siberia and take control of Ukraine. Thus, Russia would be able to control almost all food production in the world, which would allow her to blackmail the whole world. This is the economic reality on which Putin’s imperialist dream rests.

“Those who demand to reduce support for Ukraine and move forward more actively in negotiations, including agreeing to territorial concessions, like to repeat that Ukraine simply cannot win the war with Russia. This is true, but this is the whole greatness of Ukrainian resistance. The Ukrainians risked the impossible, rejecting pragmatic calculations. And the least we owe them is full support. This requires a stronger NATO, but not one that would be a continuation of US policy”, writes Žižek.

The American strategy of countering with the help of Europe is not so obvious. It lies in the fact that not only Ukraine, but the entire continent is becoming the site of a proxy war between the United States and Russia, which may end in a compromise between them at the expense of the Europeans. Europe has only two ways to get out of this situation: play neutrality, which will quickly lead to disaster, or become an autonomous player. Some on the left argue that the current Russian war against Ukraine is in the interests of NATO and its military-industrial complex, which is using the new demand for weapons to avoid its own crisis and increase revenues. But what they are really saying to Ukraine is: “Okay, you are a victim of brutal aggression, but don’t count on our weapons, because that way you will play into the hands of the military-industrial complex.”

The Russian war against Ukraine provoked the emergence of strange alliances. For example, Henry Kissinger and Naom Chomsky belong to opposite ends of the political spectrum. Kissinger was Secretary of State on the team of Republican presidents. And Chomsky is one of the main left-wing intellectuals in the US. However, when it comes to the Russian invasion of Ukraine, they are equally calling for Kyiv to cede territory in order to achieve a quick truce. In short, they both advocate the same version of “pacifism,” which only makes sense if one ignores a key fact: the war is not about Ukraine at all, it is a brutal attempt to change the entire geopolitical situation. The real goal of this war is the dismemberment of European unity, which is sought not only by conservatives in the US and Russia, but also by the European left and right. Now in France the left Jean-Luc Mélenchon and the right Marine Le Pen are on the same side.

The craziest idea of ​​modernity says that in the confrontation between Western liberalism led by the United States and the Far Eastern authoritarianism of China, Europe and Russia supposedly should join forces and form a third “Eurasian” bloc based on the Christian tradition, cleansed of liberal excesses. The very idea of ​​a “Eurasian” third way is a form of modern fascism. What will happen when voters in Europe and America, faced with rising fuel prices and inflation after the imposition of sanctions against Russia, lose their appetite for an endless war that will demand more and more, reaching a dead end? The answer is clear: at this stage, the European heritage will be lost, and Europe will be de facto divided into American and Russian spheres of influence. In short, Europe will be the site of a war with no end in sight.

It is completely unacceptable for true leftists today to support Russia. But besides this, they cannot make more “moderate”, neutral statements that the left is divided into pacifists and supporters of Ukraine. And this split should be treated as an insignificant fact that should not affect the global struggle against world capitalism. Žižek argues that anyone who does not support Ukraine today cannot call himself a leftist. Today, being a leftist who “understands” Russia is like being a leftist who, before the invasion of Nazi Germany into the USSR, seriously believed the German “anti-imperialist” rhetoric aimed against Great Britain. It’s like calling for neutrality in the war of Berlin against Paris and London.

If the left does the wrong thing now, it’s all over for them. But does this mean that the left should simply side with the West, including the right-wing radicals who also support Ukraine? On May 18, 2022, during a speech in Dallas criticizing the Russian political system, former US President George W. Bush said: “The result was a lack of checks and balances in Russia, and a one-man decision to stage a completely unjustified and brutal invasion of Iraq.” He quickly corrected himself: “I meant in Ukraine” – and then added: “Yes, and in Iraq.” The ex-president made the audience laugh, also noting that he is already 75 years old.

Read also: WP: Even with Western weapons, Ukraine will be able to lead the Russian war to a dead end, but no more

Commentators have noticed two things that follow from this Freudian slip. First, Bush’s actual public admission that the US invasion of Iraq on his orders was “completely unjustified and cruel” was greeted with laughter. No one began to say that the ex-president of the United States admitted his crime, comparable to the Russian invasion of Ukraine. In addition, it is not clear what he meant when he lightly said: “Yes, and to Iraq.” That the difference between Ukraine and Iraq doesn’t matter? And his reference to his age does not change the situation.

But there is no mystery if you take Bush’s words seriously and literally: yes, despite all the differences (Zelensky is definitely not a dictator like Hussein), Bush did what Putin is doing in Ukraine now. Therefore, they should both be judged by the same standard. Zizek notes that at the time of writing, the media reported on the decision of British Home Secretary Priti Patel to approve the extradition of WikiLeaks founder Julian Assange. What is his crime? That he exposed the crimes that Bush himself confessed to when he misspoke in Dallas. WikiLeaks has released documents showing that during the Bush presidency, the US Army killed hundreds of civilians during the war in Afghanistan. In addition, 66,000 Iraqi civilians were secretly kidnapped, tortured and killed in prisons. According to Zizek, all these crimes are comparable to what Putin is committing in Ukraine. From a certain point of view, WikiLeaks “exposed dozens of American analogues of Bucha and Mariupol.”

Putting Bush in the dock is just as illusory as giving Putin to the Hague Tribunal. Ukraine claims to be fighting for Europe, while Russia insists that it is fighting for everyone in the world against Western unipolar hegemony. Both claims must be rejected. In this case, the difference between the approaches of the right and the left come to the fore.

From the point of view of the right, Ukraine is fighting for European values ​​against non-European autocracy. And from the position of the left, Ukraine defends global freedom, including the freedom of Russians themselves. That is why every true patriot of Russia should support Ukraine.

Ukraine forced the United States to reconsider the concept of war

Textbooks will not be given to everyone: Schools will order them only for fifth-graders and teachers who stayed in their hometowns