A man tried to rob a gas station on Friday May 27 in Seyssinet-Pariset (Isère). The assailant was killed following an intervention by the police.

Passers-by witnessed a frightening scene. Friday, May 27, a service station in the city was attacked by a robber, on the avenue de la République in Seyssinet-Pariset (Isère).

According to the press release of Éric Vaillant, public prosecutor in Grenoble, the assailant fired in the direction of the cashier, before being interrupted by the gendarmes who quickly arrived on the scene.

One of the gendarmes present on the spot used his weapon during the arrest, seriously injuring the robber: “A man was lying on his back, he had traces of blood on his t-shirt, he had a wound in his jaw. He seemed to breathe and was held in respect by a policeman,” said a witness to the robbery attempt at the Dauphiné Libéré.

The witness remembered having heard three detonations and affirms that a gendarme would have removed a weapon which was on the ground near the assailant, who “did not seem to be wearing a balaclava”.

After being taken to the University Hospital in a worrying state, the robber is died of his injuries. The research section of the Grenoble gendarmerie was called upon for the armed robbery. 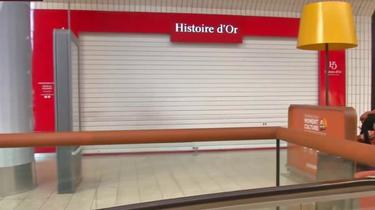 The public prosecutor also requested theGeneral Inspectorate of the National Gendarmerie (IGGN), for the use of the weapon by the gendarme.

Cannes Film Festival 2022: Tom Hanks on the red carpet for the biopic “Elvis”

We Love Green: five good reasons to go to the festival

Chantal Goya: “I never wanted to sing or make movies”