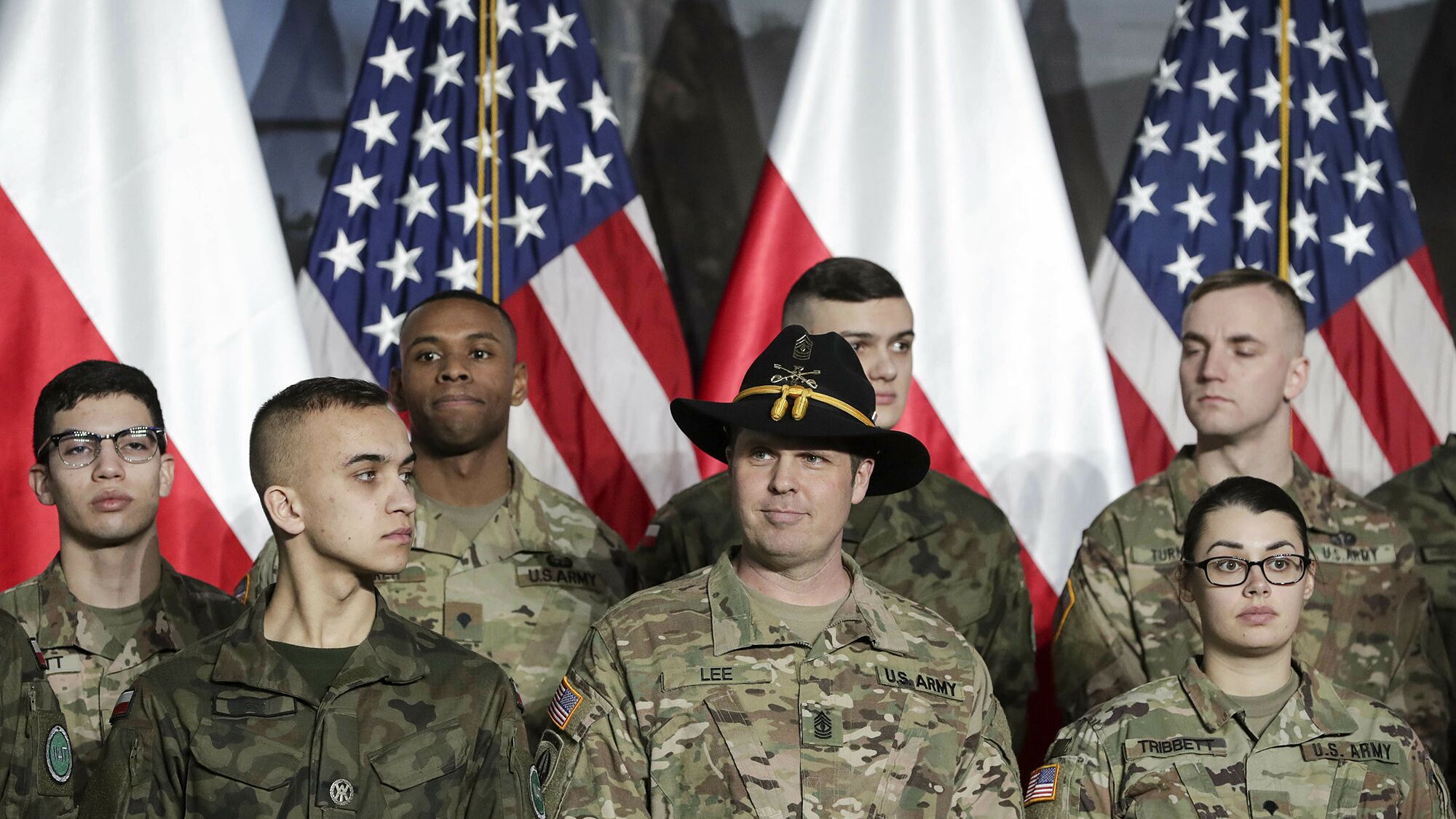 “The Russian Federation is aware that NATO is a huge power. But what matters to Putin is not statistics, but real strength. The Alliance still has to work on many defense issues, and not only on the eastern flank. Due to Russia’s military involvement in the armed conflict in Ukraine the West now has a time that it must manage wisely, while the societies of the member countries of the alliance must understand that if they want to maintain prosperity and independence, they must be prepared to make sacrifices,” Retired Colonel Professor Dariusz Kozierawski says in an interview with Onet from the Jagiellonian University.

Former Acting Commandant of the National Defense Academy Professor Dariusz Kozierawski notes that Russians violated NATO airspace 270 times in 2021. “This doesn’t happen because the pilot “stared” and flew in where it shouldn’t. Russia thus checks NATO’s air defense systems and the readiness of the alliance for defensive actions,” he says to Onet.

In 2022, Russia is “testing” the North Atlantic alliance and the unity of the West on another scale. It is fighting in Ukraine, threatening Lithuania over Kaliningrad, regularly violating Estonian airspace, and Russian politicians and Kremlin-controlled media are being thrown around by various scenarios, including nuclear war. But on the other hand, as critics of Putin emphasize, Russia is losing the conflict in Ukraine strategically and politically, and militarily does not achieve all its goals.

Professor Kozeravsky believes that Russia is an “unpredictable player” and, in dealing with such an adversary, NATO and the entire West should consider any scenario, even one that has a relatively low level of probability of implementation.

Will NATO protect the eastern flank

However, he believes that at the moment the Russian Federation does not have a real capacity to conduct further military operations in areas other than Ukraine. “Russia is militarily tied to Ukraine. The more the alliance supports Ukraine, the harder it will be for Moscow to end this conflict by announcing its success,” he says.

Time plays in favor of NATO here, but the expert emphasizes that the West must act quickly.

Many believe that Russia can still succeed in Ukraine, and after the restoration of its military forces, it can go, for example, to the Baltic states. German military historian Sönke Neitzel warned in a lengthy interview with Die Welt that NATO’s eastern flank is poorly defended and that in the event of an attack on Lithuania, Latvia or Estonia, the alliance would have problems repulsing Putin’s troops.

“The criticism of the German expert is largely justified. He clearly indicates that the alliance must mobilize and wake up. However, it must be emphasized that after the annexation of Crimea to Russia and the start of the conflict in the Donbass (in 2014), NATO received a warning from Putin that he pursues its goals through expansive politics and military tools,” Onet’s interlocutor comments.

West got more time, but the to-do list is long

Professor Kozeravsky draws attention to the fact that currently about 25 thousand soldiers of the alliance are stationed on the eastern flank of NATO, who are trained there and perform various tasks, for example, they are responsible for the supervision of airspace (including the Baltic states – Lithuania, Latvia and Estonia).

The expert has no doubt that this figure should be increased. “Now these 25,000 soldiers should be seen in a political rather than a military dimension. The deployment of these forces on the eastern flank of NATO should show a possible aggressor that any attack will activate all members of the alliance, because in the end the soldiers of most of its member states will be attacked “.

According to the expert, in addition to the military strengthening of the eastern flank, the West has several other important tasks. First, it must build a de facto alliance in the political dimension, because not all countries of the alliance perceive the Russian threat in the same categories. The expert points out the differences in approach between the Baltic States and Poland and, for example, Germany.

Second, the West must isolate Russia in areas that are important to it and limit its influence there. We are talking about Transnistria, the Balkans, the Caucasus, the Middle East and the eastern flank of NATO mentioned here, with a special emphasis on the “Suwalki corridor”. Professor Kozierawski points out the need to be consistent on the issue of sanctions. There is also no doubt that the key is to further limit Russia’s investment opportunities in various regions, with particular attention to the restoration and development of its military potential.

The third issue, by far the most pressing, is military support for Ukraine.

The expert believes that now is also a great time for NATO expansion through Sweden and Finland. He draws attention to the fact that for the alliance this would mean a significant increase in the defense potential, and hence the limitation of Russia’s influence in this region. “Finland and Sweden have a significant military potential, a very high level of organizational culture and cooperation (that is, the ability to carry out combat missions together with NATO), because for several decades their troops have been cooperating with the alliance.”

Onet’s interlocutor emphasizes the importance of another issue. “In Finland and Sweden, compulsory military service. If such rich and prosperous countries, which have so far been neutral, are deeply aware of the threat from Russia, then what makes the states of the eastern flank of the alliance feel so safe not to introduce this form of military service “In the current situation, it must be returned.”

The Colonel has no doubt that a kind of race against time continues between NATO and Russia. And although on paper the balance of power looks in favor of the alliance, Onet’s interlocutor warns against jingoistic optimism. “Russia realizes that NATO is a huge power. But what matters to Putin is not statistics, but real power,” he says.

Just like in sports, ultimate success isn’t just about millions of dollars.

The professor gives a figurative comparison: “A football team can cost a lot of money, but it’s not dollars that play on the field, but specific players. The daily routine, the level of preparation and concentration are important. There are many factors that determine the final success. Not always financial indicators allow you to win. If we translate this into the situation in NATO, we can say that this team has something to work on. Numbers alone are too few, and that the allied armies should be well armed, joint exercises should be carried out often. Meanwhile, I got the impression that for many years in many Western countries there has been some kind of mythical belief that we can reduce defense spending with impunity, because in the event of a threat of armed conflict, “some kind of NATO” will come and protect us. military potential of each of the Member States, which must be constantly ready for real use”.

“In the alliance, it is necessary to increase the number of exercises at the level of the brigade, division, army corps. True, they are being held, but I’m talking about exercises with troops on the ground. It would be nice if, for example, in the area of ​​the Suwalki corridor, exercises of several tens of thousands of NATO soldiers. This would be a clear signal for Russia, indicating the decisive and real potential of the alliance in preparing for the defense of critical areas on the eastern flank, “the expert estimates.

The Colonel also points to the need for individual states to improve the system of training reserves, which works well in Finland and Sweden. “In addition, it is necessary to expand the critical infrastructure on the eastern flank, where the alliance will be able to support troops performing tasks in contact with the enemy. Such infrastructure should be developed in other areas, because the troops deployed by air, sea and land must turn further away from the eastern border,” he notes.

Professor Dariusz Kozierawski emphasizes that the conduct of an active and creative security policy of the alliance in individual states (including education in the field of security) to prepare society for participation in the implementation of NATO military policy (through the awareness by civil society of the need for direct participation in the armed struggle for the preservation independence and sovereignty of one’s own state) will be decisive in the coming years.

Professor Dr. Dariusz Kozierawski is a member of the Department of National Security (Institute of Political Science and International Relations, Faculty of International and Political Studies) of the Jagiellonian University. Colonel in the reserve of the Polish Army, former rector-commandant of the Academy of National Defense, member of the Brotherhood of Veterans in Poland and the Association of Veterans of UN Peacekeeping Missions. Conducted seminars on strategy and security in the European Parliament, the EU Military Headquarters, the NATO Defense College in Rome. Participated in international operations, conducted research in the zones of military and stabilization operations in Bosnia and Herzegovina, Kosovo, Iraq, Afghanistan, Moldova, Jordan, Armenia. He led NATO exercises in Baghdad and Kyiv. Researcher/expert involved in international security, security strategy and the study of armed conflicts.

ROC about the decision of the UOC-MP on “independence”: No one contacted us, learned from the Internet – news of Ukraine, Politics

Shelling of the Zaporozhye region – a wounded child