A rally in support of the Lido teams is scheduled for Saturday May 28 on the Champs-Elysées (8th), while most of the employees of the famous Parisian cabaret risk being made redundant.

“The CGT Spectacle calls on all Ile-de-France entertainment employees and the public attached to the Lido to support them by joining them”, communicated the union organization, inviting all those who wish to come. support the employees of the Lido, during a rally organized this Saturday, May 28, at 5 p.m., in front of the famous Parisian cabaret.

The CGT Spectacle calls on all Ile-de-France show employees and the public attached to the Lido to support them by joining them and them! pic.twitter.com/x4JoUQCLo5

United, all the employees of the Lido are fighting to save their jobs, but above all to express their dissatisfaction. after learning mid-May that their cabaret as it had existed since 1946 could give way to a room for “musical shows”, according to the will of its new shareholder.

On May 12, the management of the Accor hotel group indeed presented a “reorganization project”, which notably provides for the “redesign of the dinner-show model”. Overhaul which will result in the disappearance of the permanent troop, with a hundred permanent positions eliminated, “mainly within the room and artistic services”.

“for the benefit of a simple theater”

In a petition launched on change.org and already signed by nearly 53,000 people to date, the employees therefore call on Accor to rethink “the safeguarding of the know-how and trades that make the success of this house […] an art that promotes French heritage throughout the world”.

“We cannot see the Bluebell Girls and their Parisian revues disappearing with all the teams in favor of a simple theater which could offer banal musicals”, they write again. 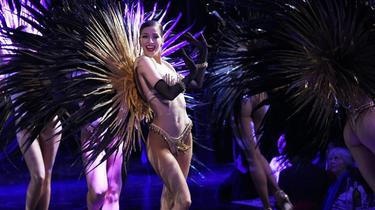 Today, the Lido employs 73 people in the dining room, 40 artists, 15 dressers, 10 stagehands, 9 technicians, 8 administrative employees and 4 seamstresses. That is about 160 people, the vast majority of whom – everyone except a few machinists and technicians – will be made redundant.

If the negotiations related to breaches of contract are already open, the weight of the immense Accor hotel group could quickly bend the most undecided. And things could go very quickly, while the end of the procedure is scheduled for Friday, August 12.

War in Ukraine: all about the “Terminator Tanks” deployed in the Donbass

these 5 varieties of flowers to offer

Cannes Film Festival 2022: Tom Hanks on the red carpet for the biopic “Elvis”