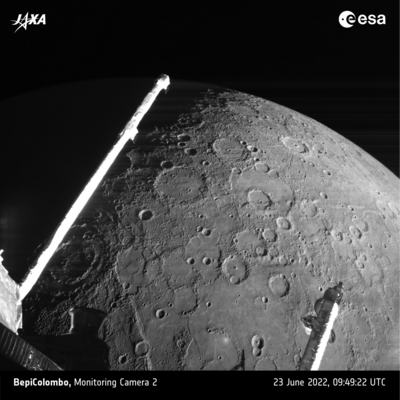 European-Japanese apparatus BepiColombo transmitted to Earth new images of Mercury. How reported on the website of the European Space Agency, the probe took a picture on June 23 during a rendezvous with the planet to perform a gravitational maneuver.

In the picture you can see not only Mercury itself, but also parts of the probe that revolves around it. In particular, the magnetometer rod and a small part of the antenna are visible. At the same time, the magnetometer rod roughly follows the terminator of the planet – the boundary between its day and night sides.

In addition, multiple impact craters of Mercury were also included in the image. Among them is a multi-ringed depression 200 kilometers wide.

BepiColombo is a joint European-Japanese space mission designed to study Mercury. Despite its proximity to Earth, it is one of the least explored planets in the solar system. The mission consists of two automatic stations and a module for their transportation.

The purpose of the mission is to study in more detail the structure of Mercury and determine the nature of its magnetic field, as well as gain insight into how planets are formed located so close to the parent star.

Herculides – on the night of May 31, the inhabitants of the Earth will be able to see a new meteor shower

How dangerous is the technological embargo of the West for the Russian defense industry?