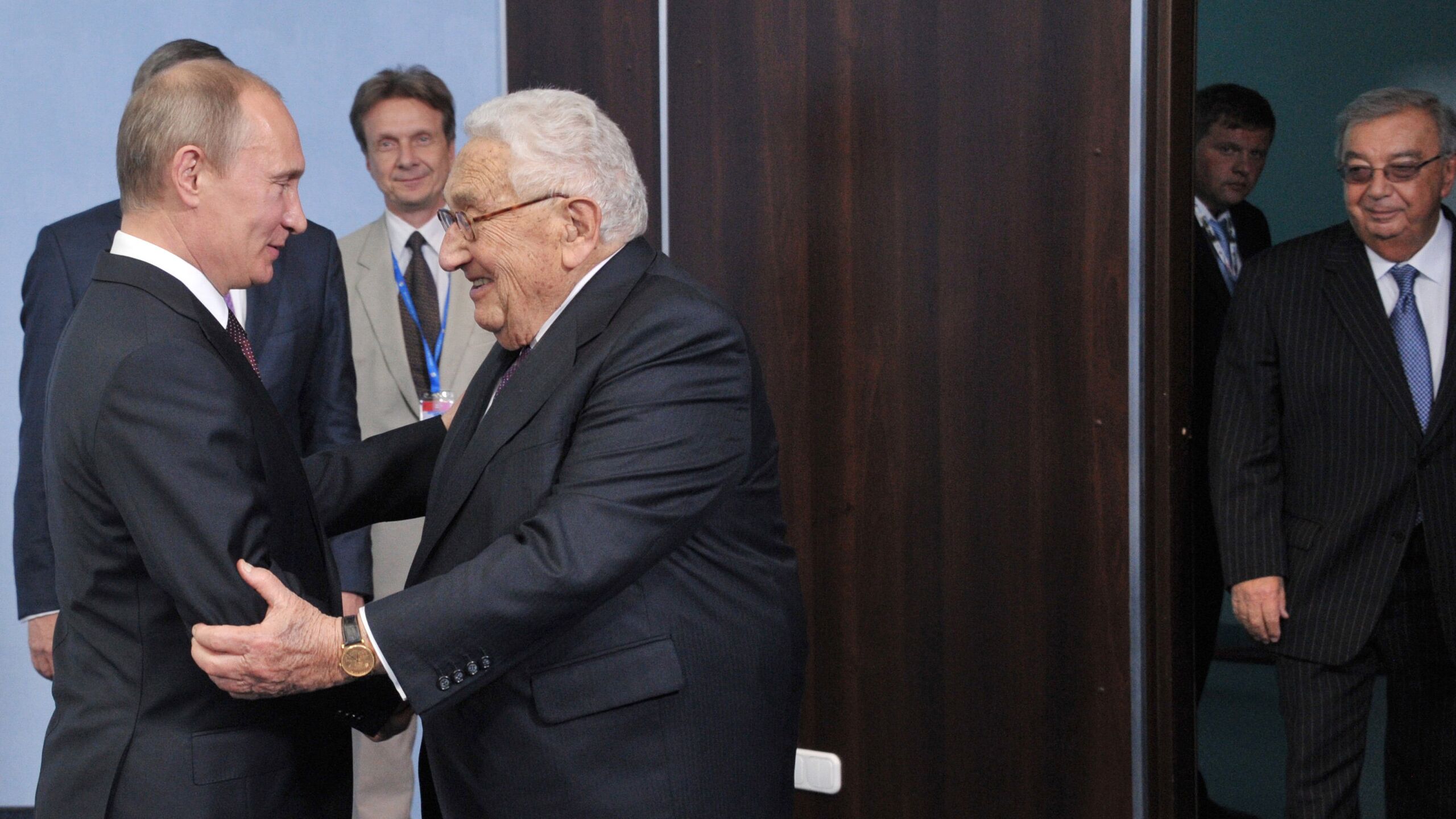 Henry Kissinger is one of the most controversial public figures of our time. The former national security adviser and US Secretary of State evokes strong emotions in people. Depending on who you ask, Kissinger is either a typical realist who orchestrated the split between communist China and the Soviet Union, or a war criminal who authorized more than 3,800 bombings of Cambodia.

Kissinger, who turns 99 on May 27, has only sparked more controversy about himself. Speaking at the World Economic Forum in Davos this week, this former prominent statesman offered advice to the Ukrainian government: The time has come to think of a diplomatic settlement to end the war, and that settlement should include territorial concessions to Russia. “Ideally, the dividing line should be a return to the old status quo,” Kissinger said, referring to the pre-war lines, according to which Russia controlled the Crimean peninsula and about a third of the territory of Donbass. “Kyiv’s continuation of the war behind these lines will no longer be a battle for the freedom of Ukraine, but a new war against Russia itself.”

Kissinger’s proposal was almost immediately rebuffed. Within hours of Kissinger’s speech, Ukrainian President Volodymyr Zelensky reaffirmed his government’s position: there will be no peace talks until Moscow withdraws from every inch of Ukrainian territory, including Crimea. Steven Pifer, former US ambassador to Ukraine, tweeted that “the territory of Ukraine does not belong to Kissinger to give to Russia.” Edgars Rinkevics, Latvia’s foreign minister, went so far as to compare Kissinger to Neville Chamberlain, the British prime minister who will forever be remembered as the man who ceded the Sudetenland to Nazi Germany in 1938.

It is easy to see why Kissinger’s remarks have attracted such disdain. First, in all this Ukraine is a victim. The Russian military special operation is nothing but an act of aggression, and the Russian army carried it out in the most deplorable way imaginable. Entire cities have been destroyed, or, like the seaside Mariupol, wiped off the face of the earth. Giving in to an aggressor will leave a bitter taste in your mouth. One can only imagine how bitter this taste will be for those who have lost loved ones.

Second, the Ukrainian government and people consider ceding territory to the Russians as dangerous. Mikhail Podolyak, Zelenskiy’s chief negotiator with Russia, reaffirmed Kyiv’s position that ceding territory to Moscow in exchange for a ceasefire or peace deal would simply whet Russian President Vladimir Putin’s appetite for more land. According to a recent poll by the Kyiv International Institute of Sociology, 82% percent of Ukrainians do not support territorial concessions in a hypothetical peace deal with Russia.

There is also a feeling of extreme certainty in the Ukrainian leadership that Russian troops can be defeated on the battlefield. As the war continued, Kyiv’s negotiating position hardened, fueled in large part by the success of the Ukrainian defenders and the slowness of the Russian army, which continues to suffer from the same morale, logistics, and difficulty in maintaining effective command. The notion that Ukraine would defeat a much larger and better-armed Russian army, brushed aside as fantasy in the early days of the conflict, no longer seems so crazy. Some Western analysts are advising Ukrainians to fight until Putin, and by extension Russia, is put to shame.

However, war is an unpredictable beast. Those who have morale today may lose it the next day. Soldiers learn from their mistakes and overcome setbacks. And the Russian army is no exception to this. After many losses and tactical retreats, the Kremlin realized that deploying a special operation in Ukraine in several directions was a misguided idea that had depleted the supply lines of the Russian military, was born from an underestimation of the combat readiness of the Ukrainian army, and dispersed Russian units on too many fronts. Now the Russians have changed their sting operation plan from taking over the entire country to expanding their tight control over a certain part of Ukraine’s territory – in the east and south. This revision by the Russians of the goals of the operation had an effective effect. Russian forces completely blocked Ukraine’s access to the coast of the Sea of ​​Azov and created a land bridge between Russia and Crimea. While Moscow’s level of fatigue is no doubt significant, Russian forces are making significant progress on the battlefield, especially in Luhansk. Severodonetsk is now under the threat of complete encirclement. The Ukrainian army certainly has a desire to fight these Russian achievements, but can Kyiv now continue to boast of its combat potential?

Ukrainians also have to contend with Western weariness from this war. To date, the United States and NATO have firmly united in support of Kyiv, supplying the Ukrainian army with increasingly advanced weapons systems, such as the M777 howitzer. But as the Russian special operation develops and Ukraine accumulates losses and setbacks, there may come a time when the West will become increasingly divided over the policy towards Ukraine and how the end of the Ukrainian conflict should look like. While the US, UK, Poland and the Baltic states want to inflict a strategic defeat on Russia, Germany, Italy and France are more concerned with reaching an end to the war in Ukraine as quickly as possible. For now, Zelenskiy may still scoff at the idea of ​​a ceasefire, but as the fighting drags on, he cannot rule out a scenario in which some Western leaders who are now staunch supporters of Ukraine begin to reconsider their policies.

No one, including Henry Kissinger, can tell Ukraine what to do. Ukrainian politicians will have to make their own decisions about whether a negotiated end to the conflict is the best way to save their country, and if so, what terms are acceptable to them. Right now, their answer seems more like the word “no”. But over time, the pendulum can also swing in the direction of a “yes” decision.

Author: Daniel DePetris is a researcher at Defense Priorities and a foreign affairs columnist for Newsweek magazine .

Remember how the US reacted to Soviet missiles in Cuba? Shame on Western leaders and NATO for ignoring 20 years of Russian warnings about NATO provocations and expansion. Since 1991, the US has invaded more countries and killed more people than Russia. Remember how the US illegally invaded Iraq because supposedly Iraq could be a threat in the future? 1 million people died. All US activities in Syria violate international law. The US does not have a UN mandate to be present in Syria. The US instigated the violent overthrow of legitimate governments in several Central and South American countries, replacing them with violent right-wing dictatorships because Washington felt threatened by the elections there. When a country feels its back against a wall, it snaps if it can. Trying to stifle the Russian economy and create instability in Russia is very unreasonable and will only lead to collective punishment of its entire population. This is all the collective suicidal thinking of the West.

In addition, it just kills me to see how our media glorifies this Azov regiment (the organization is recognized as a terrorist organization, its activities are prohibited in the Russian Federation – Note. InoSMI), simultaneously “whitening” its history.

Google: “Time Reports. Azov Battalion. There are still many white supremacists within the Ukrainian militia, 4 years after they announced denazification of their ranks in 2019. The US even provided this group with training and weapons. The FBI claims Azov members traveled to the US and trained American white supremacists.”

Those who want war to the last Ukrainian, let them remember: if Zelensky was a smart man, Putin would not have entered Ukraine. Zelensky must hang!

Podolyak cheats, he “moved the goalposts”! Ukraine’s demand to return Crimea preceded the special operation that began on February 24. That is what complicates negotiations. Zelensky needs to abandon jingoism and watch his words. He needs to be smarter. He himself threatens to disrupt foreign support.

Kissinger is a snake. All of the “Nixon boys” have already left the stage, and some have even served time in prison. Only slippery Kissinger remained on the surface. I have always been convinced that he is providing both Israel and the Soviets with information that harms our American interests.

The famous war criminal, with his glasses and thick German accent, agreed to Putin and got dirty in it.

If we give Russia even one inch of new territory and stop the war, they will regroup, rearm and return again for these lands in a few years. Russians are like termites. You either completely destroy them when they invade, or your house will eventually collapse all over.

Are these Russian termites? Oh well. Doesn’t this statement of yours already smack of racism?

And further. Be careful with termites, which have 7000 nuclear warheads.

America will soon run out of money. Even “war hawks” will see that they are being deceived by Israel and Europe. Inflation and gasoline prices. This is what the United States really should be “fixated” on now.

The truth can no longer be hidden in this uninformative delirium:

1. Russians in every sense won in Ukraine.

2. The West is humiliated and has shown itself to be a “paper tiger” as most of us have known before.

3. “Shock and awe” sanctions against the Russian economy and the Central Bank of Russia have become a real disaster for the West and have done more harm to Western interests and the Western economy than to Russia’s.

4. The EU and “Europe” are finished as an institution and a global player. Now they will “break loose” politically and economically. Along with a severe economic depression in Europe, political upheaval is coming.

5. Russia completely outplayed the West. Russians are strong, among them there are real men, thinkers and cunning diplomats. And we are weak.

End of the West…

Western sanctions have brought the world to the brink of starvation. But, of course, Russia is to blame

The British about Biden’s cheat sheet: the whole country is going downhill with Joe