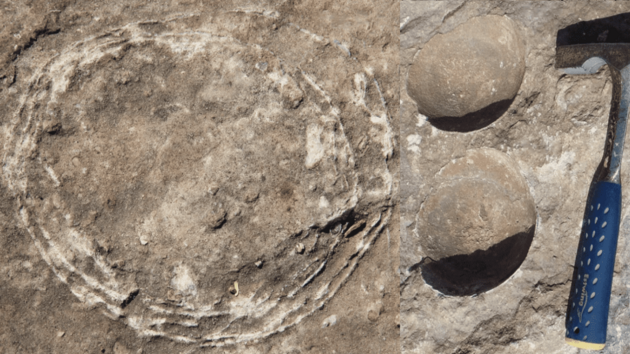 Scientists managed to find a fossilized dinosaur egg that was hiding inside the egg. This phenomenon is known as ovum-in-ovo and is sometimes found in birds such as chickens, but was first seen in dinosaurs and reptiles in general. I.F.L. science.

The unusual egg belonged to a titanosaur and may reveal more about the morphology of their oviduct, which was likely more like modern birds adapted to sequential oviposition. It is likely that these dinosaurs were also capable of laying egg after egg.

A “rare and important find” was made in the Lamet Formation in India, which dates back to the Upper Cretaceous. The egg was discovered at Bagh Dinosaur Fossil National Park, where 52 sauropod nests were found.

Read also: Paleontologists have discovered the remains of a new species of dinosaurs with “terrifying” claws

One of these nests contained 10 eggs, including an “egg in an egg” that scientists found had two shells. The significance of this find lies in the fact that it can tell about the reproductive strategy of these dinosaurs and the structure of the organs associated with it.

“The discovery of ovum-in-ovo in a titanosaurian nest suggests that their oviduct morphology was similar to that of birds, which opens up the possibility of sequential oviposition in this group of sauropod dinosaurs,” the study authors concluded.

The discovery highlights that this phenomenon is not unique to birds, and that sauropod reproductive behavior was similar to that of other archosaurs, the scientists said. In addition, the find suggests that sauropods had more in common with birds and crocodiles than with non-archosaurian reptiles, making the find invaluable to evolutionary biology.

However, scientists insist that further research on the unusual egg is needed.

Previously In the southern Chinese city of Ganzhou, scientists have discovered a perfectly preserved dinosaur embryo that was preparing to hatch from an egg like a chick. The researchers estimate that the age of the embryo is at least 66 million years.

Arson or negligence. What is known about the fire on the Kashirskoye Highway

Rising fuel prices: special operation in Ukraine is no longer the main problem of the West