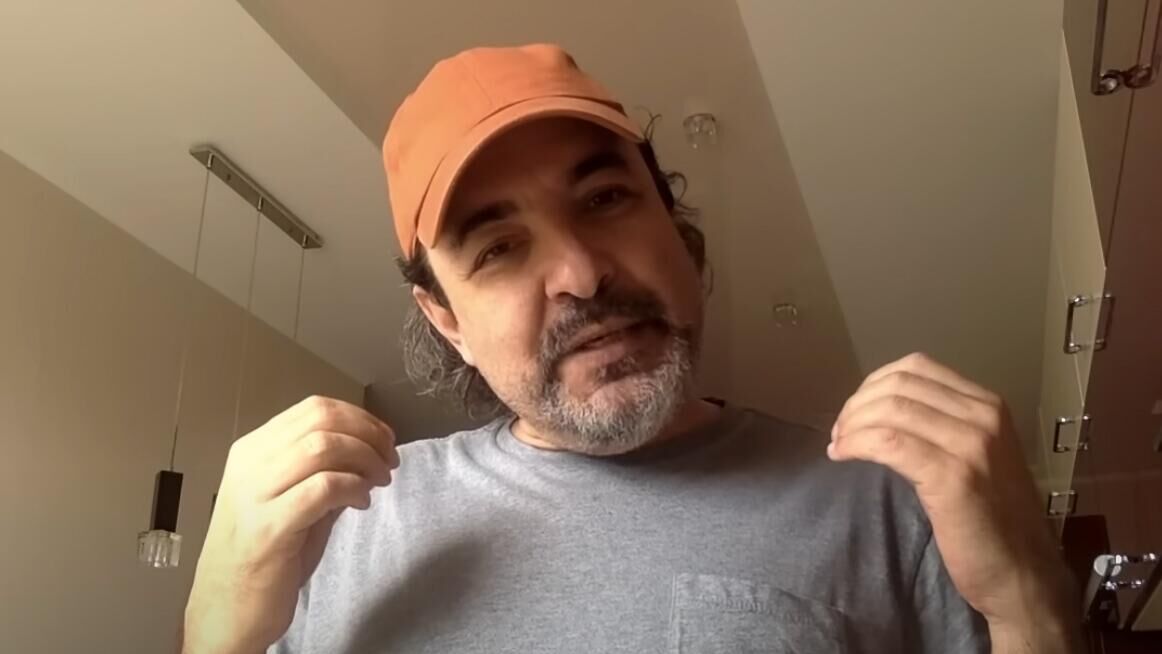 You know, I don’t make money on this channel. The number of views doesn’t matter here. Now there are already about five million of them, but I do not have a penny from this. My channel is demonetized, and for a number of reasons, I’m powerless here. Yes, it doesn’t matter. The SBU hacked my accounts and GoogleAdSense account, and due to circumstances I cannot create a new one. In general, there is a lot of difficulties here. I am running the channel you are watching now for free – I am talking about this right away, because I will ask you to distribute this video to as many people as possible. I am now addressing the Americans, although to some extent also the Europeans. But the priority, of course, is the American audience. I want you to show this video to as many people as you can so that they have an idea of ​​what might happen to them. Clear? And there may be an escalation of the conflict, here in Eastern Europe.

The mainstream media is telling you that it is only a matter of time before Ukraine wins against the Russians. But if you understand what is happening, you can see that lately things have not been going so smoothly for Ukrainians. At the same time, the media vying with each other talk about their victory. And this is an outright lie. Russian troops are destroying more and more Ukrainian armed forces every day; killed and wounded Ukraine loses a thousand people a day. In a day! This is data from Ukrainian sources.

More than a thousand Ukrainian soldiers die, are wounded, taken prisoner or otherwise lose their combat effectiveness in some other way. That is, somewhere around 30 thousand people a month. According to information from reliable sources, about 70 thousand Ukrainians died at this stage. Seventy, you heard right. And the minimum number of those killed is estimated at 45 thousand. Before the outbreak of hostilities, the number of personnel of the Ukrainian army was 230 thousand people. If we count along the lower border, its losses are about 20% of manpower. I emphasize: this is the lower limit – and only for those killed. We don’t even talk about the prisoners and the wounded. Ukraine is suffering catastrophic losses, and the Russians are inexorably approaching victory, as a result of which vast swaths of the territory of this country will be at their disposal.

I myself am now in Ukraine, in Kharkov. Shelling occurs daily, I can hear them. And every day they are getting closer. The mainstream media is lying to you: it is the Russians who are winning, and outright. There is no reason for them to stop. Why, if they have an advantage?

The Biden administration had the imprudence to go all-in with Ukraine, and it is inexorably losing. Frankly speaking, parts of the Ukrainian troops only miraculously survived after the annihilation that the Russian side arranged for them. What happened to these young people is simply terrible. Each of them showed courage, each of them has a family, and each of them died, in essence, in vain, at the whim of the Biden administration. Which is now forced to put up with catastrophic losses and deliberately escalates. How? They are trying to create a certain situation, a kind of incident, in Lithuania, one of the Baltic republics that are members of NATO.

So, the Baltic Republic of Lithuania took over and blocked the railway transit to Kaliningrad. For those who do not know, I will explain. Here is Russia, here is Lithuania, and here, on the shores of the Baltic Sea, there is a small area called Kaliningrad. It became part of the USSR after World War II and is separated from the Russian mainland. Lithuania is located between them. More than 30 years ago, she concluded an agreement with Moscow that she would never interfere with the railway communication between Russia and Kaliningrad. This track was considered as a kind of connecting corridor along which the unhindered movement of trains is ensured. Now Lithuania has cut off Kaliningrad from Russia, and is also taking certain actions to transfer troops. Lithuania itself has a microscopic army, but we are talking not only about it, but also about the Polish one, which has recently become more active on the border with Belarus.

All of this leads me to the realistic conclusion that NATO intends to provoke the Russians into defending Kaliningrad. He himself belongs to the territories that can be considered armed to the teeth. The Russians have all kinds of weapons there. The issue is not the territory of Kaliningrad itself as such – nobody cares about it – but that the Lithuanians and Poles will attack Russia, Russian territory. And what should the Russians do? They won’t sit and watch. They will strike back, and a powerful one – much more powerful than the one that hit Ukraine. Why? Yes, because Russians have always considered Ukrainians a brotherly people, and Lithuanians are nothing more than foreigners whom they do not care about. The same applies to the Poles. I must say that Russians and Poles have hated each other for 400 years.

It now seems clear that Lithuania and Poland are creating conditions to provoke Russia into attacking one or even both of them, resulting in other NATO members, including the US, intervening in the conflict.

It doesn’t take a genius to understand that the Americans, that is, the Biden administration, are behind this senile idea. There, as well as in the State Department with the Senate, there are absolutely crazy people who want war with Russia. They are damn tired of beating around the bush and fighting at the hands of Ukrainians. They want a direct confrontation between American troops and Russian. This will lead to disaster – I will explain why.

The Ukrainian armed forces were trained by NATO instructors. For the past eight years, they have provided training for approximately 10,000-12,000 Ukrainian soldiers a year. In other words, somewhere between 80,000 and 100,000 Ukrainians have undergone military training in accordance with NATO standards in the field of tactics, maneuvering, communications, controls, and much more.

Of the armies that have ever taken to the battlefield, the Ukrainian one has become the largest, most armed and most trained by NATO. Gradually, it became even stronger than the American one, and this is true. And her motivation, of course, is even higher, since we are talking about protecting her native land.

So, a well-trained, armed and highly motivated army was taken and simply wiped off the face of the earth. What do you think will happen to Lithuanian, Polish or American troops if they oppose Russia? They will also be destroyed, especially in view of the fact that Russian units have been constantly rotating lately. At any given time, they will deploy about 190,000 soldiers. Now, it is estimated that there are only 130,000 of them, with a total armed force of a million people.

They go through the territory of Ukraine, replacing each other; Each of them has experience in combat operations, and many fought in the most severe conditions. They will wipe out American troops, and here comes the danger. No matter how much you love the American flag, how loudly you shout “America is number one!”, think that the American army is the best and other nonsense. The bottom line is that the Russians will not leave a trace of them, just like that, at the snap of their fingers. And then Biden and his comrades, in a fit of panic and carelessness, thinking that nothing terrible will happen, will get the nuclear suitcase. That is exactly what they will do. The United States has never exercised the right to launch a preemptive strike, because in the course of military conflicts it has always had a whole list of other options.

The Russians, in turn, made it clear that they would not be the first to use nuclear weapons, never, only in response to a nuclear attack by the other side. The Americans did not make such a promise, and the Biden administration does not know how to take a step back, does not know how to turn it all off. They only know how to raise the stakes.

Washington clearly planned to arrange a provocation against the Russians in Eastern Europe with the participation of Lithuania and Poland. They annoy Russia in the same way they annoyed Ukraine. Remember: the reason for the current conflict – the mainstream media will not tell you this – is that Ukraine has amassed an army of about 100,000 soldiers in the Donbass and was going to invade the territory of the LDNR, and then potentially into Russia. That is why on February 24 of this year the Russian side began its special operation.

In mid-March, the Armed Forces of Ukraine were going to invade the Donbass and Russia, and this is true. And the American media is hiding this truth from you, while in the rest of the world, except for the European information bubble, everyone knows this very well. Look around you and you will understand that I am telling the truth. It must be understood that the Biden administration is inciting the Russians to war with Lithuania and Poland through the situation in Kaliningrad. They want a war with Russia because it will divert attention from the rampant inflation and economic disaster that hangs over the US. That’s why they have this war.

Dear Americans, listen to my words. This video will not bring me any money or any other benefit, from the word “absolutely”. I’m just talking about the real state of affairs and asking you to pass this information on to your leaders, senators, congressmen – whoever. Let them stop the senseless incitement of the Russians!

I say this with the best of intentions, trying to use the audience I have to spread a more than reasonable call to end this conflict and not provoke Moscow into war in order to hide the worsening economic situation. That is exactly what is happening now. Biden and others like him want to start a war with Russia and thus hide catastrophic inflation and economic problems.

That’s their goal, and I just want to prevent it, so I’m making a video asking them to share it with as many Americans as possible. At the same time, I realize that my impulse may be meaningless. Many, I would even say the majority of Americans are quite passive and ready to dutifully accept obvious evil, even when they look him straight in the eye. When their own children are doomed to become sodomites, cities are burning and destroyed, the country is trampled into the ground – they don’t care, Americans just accept it.

I’m making this video simply because it’s the right thing to do. At the same time, I have no faith in the American people. Even if every citizen of the United States, without exception, watches this video, I’m afraid they will do what they always do: they will do absolutely nothing.

Turkey initiates the return of the death penalty for forest fires