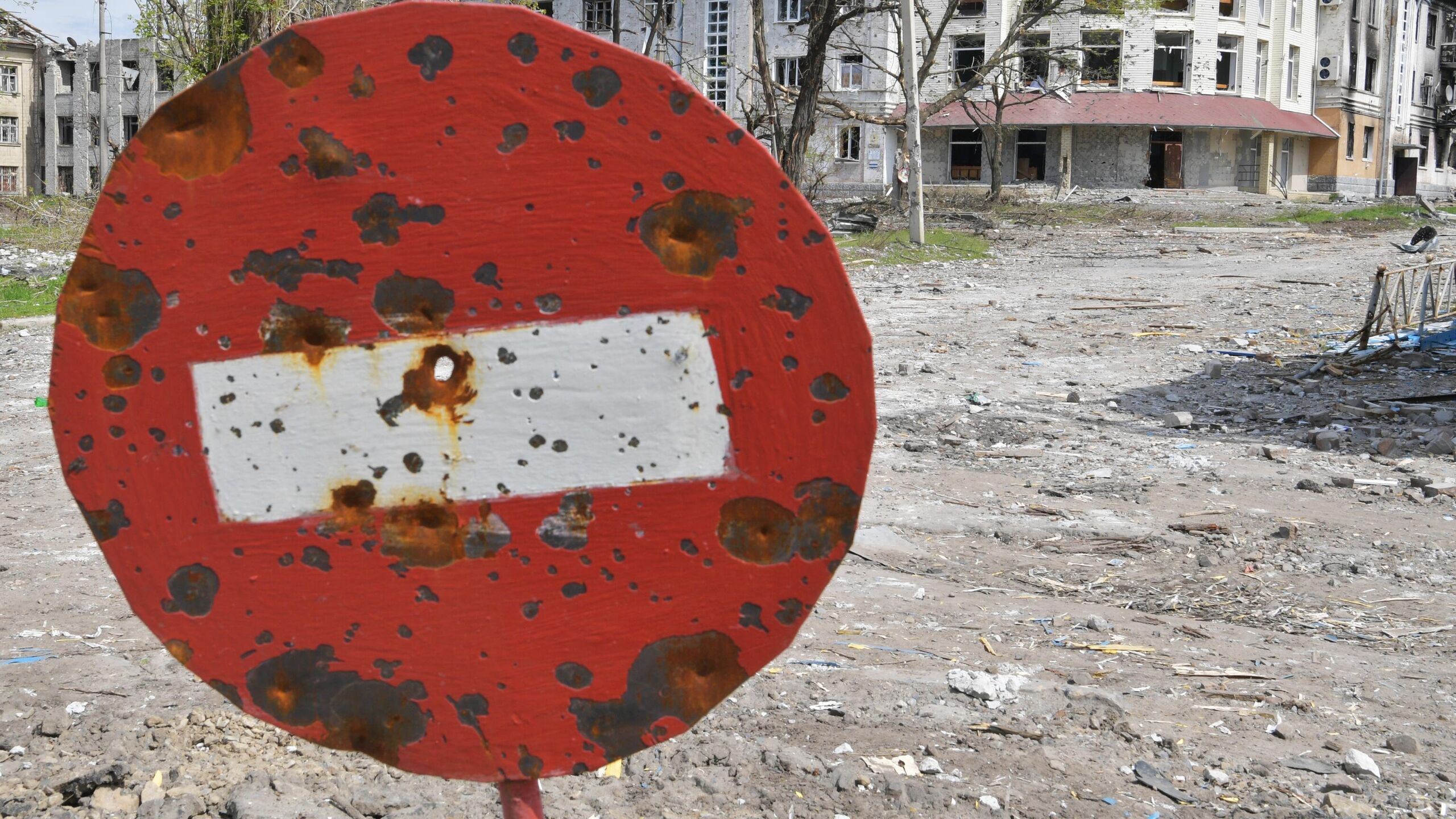 : Adrien Boke, you have seen many horrors during your 16 days in Ukraine. Tell us about them.

First of all, I must say that I really saw terrible crimes when I was in Ukraine. And all of them were committed by the Ukrainian army. It is possible that the Russian army also commits crimes, but I have not seen them.

First, tell us how you got to Ukraine, what brought you there recently.

First I was called by my former friend about military service. By military specialty, he was a military orderly, and he had already spent several weeks in Ukraine. It was about using my medical skills to help refugees and other vulnerable groups. I first said “No!” My colleague was persistent, but I refused several times.

Finally, I was convinced. It was about medical care, specifically about the transportation of medicines to the civilian population, especially women and children. One of our main directions was to help minors in orphanages.

And you stayed in Ukraine long enough?

I spent 16 days in Ukraine, and I had two trips to Ukrainian territory. So 16 days were distributed between two trips. And 10 days ago I returned through Slovakia and Poland to France. During my stay, I happened to visit Kyiv, Bucha, which everyone talked about so much, as well as Lviv. When I was in Lvov, it just got hit by a missile attack – remember, five missiles were reported.

In Ukraine, I was doing what I planned to do: delivering medicines to hospitals in a particularly vulnerable situation, as well as to orphanages where medicines were most needed. When needed, we also provided medical assistance. Since we cooperated with the Ukrainian military, we also provided them with assistance – we handed over, for example, means to stop bleeding, Israeli medical supplies. But I was not going to participate in the war, my goal was to help the civilian population. We were in the same “network” with the Ukrainian military, and I saw things that I was not supposed to see.

What you say is valuable. Because you were there, and many others who are now talking about Ukraine, they were not there. And you are responsible for your words about the terrible things you saw there.

Yes. I have seen terrible things, I have seen war crimes. And I repeat: all the crimes that I saw with my own eyes were committed by the Ukrainian military, not Russian. This does not mean that the Russian military does not commit any crimes. But we do not talk about the crimes of Ukrainians. This is what shocked me the most when I returned to France. 80 percent of the people who speak on TV about Ukraine in our country simply were not there, at least during the hostilities. But they allow themselves to speak.

It infuriates me – all these gentlemen from the right and left of the political spectrum are talking about Ukraine without knowing it. And all this is superimposed on the terrible coverage of the Ukrainian conflict by television. There is not just an abyss between what is really happening there and what we are saying on TV. I would say that there is a whole highway between them, along which traffic has not yet begun.

Little is said about the fighters of the Azov battalion* in our country. But they are everywhere there – not only at Azovstal, not only at the bases. They are in Kyiv, they are even in Lvov – everywhere. There are thousands, not hundreds. They have neo-Nazi insignia. And look what happens: Europe gives away its weapons for nothing to a large military force that openly uses Nazi symbols! There is no need to conduct investigations to understand: the badge of the Azov Battalion* is an old badge of SS units. And you see these signs all over the country! They shake everywhere without problems. I know these warriors from Azov, I gave them medicines. One, laughing, said in front of me that if Jews or Negroes fell into his hands, he would “cut them into pieces.” The Azov people had such funny conversations.

And they said it in front of you! Are you sure they weren’t joking?

They laughed, but it was not a joke: they were amused that it was possible to act like that, talking about Jews and Negroes like that. And I also saw such a terrible thing: I saw what happens to Russian prisoners of war. They were brought in in small groups – three, four people in a truck. These Russian prisoners had their hands tied, it was clear that they had been treated badly before. And when they jumped from the truck, the warriors from Azov* shouted out to them: “Which of you are officers, get out!” The guys either confessed or didn’t. And for those who did not admit their officer rank, they were shot from a Kalashnikov in the knees. For what? They were completely defenseless, harmless! Their hands were tied! And those who turned out to be officers were shot in the head. Simply because they had the misfortune to tell the truth about themselves.

This is what is happening in Bucha, this is what is happening in general in Ukraine – at least in the places where “Azov” is in charge *. And we don’t talk about it. And the way we report about the bombing of peaceful quarters by Russian aircraft! I saw American TV journalists near Bucha who filmed a fake about “civilian casualties” and destruction allegedly caused by a Russian Air Force air strike, as well as artillery shelling. And now they are filming all this right in front of me in a small park. With some text like this: “Here, Russian bombs hit a peaceful park, this is terrible, unacceptable,” etc. “I ask them:” What are you doing? It didn’t happen!” And they told me: “It’s not scary, it will make us a picture.”

Do you know where the destruction for the picture came from? They were made by Azov fighters*, who fired at Russian positions there with their mortars and missed by several hundred meters. Mines and shells hit the park. I know this because I was next to these Azov people, they themselves told everything, besides, I recognized the shells …

As for the shelling of their victims, here, too, the Western mass media take a dishonest position. Russians and Ukrainians shoot at each other in street fights. And the Western media show the destruction resulting from this and say that the Russians did it all. Both sides miss: and the Ukrainians, when they shoot at the Russians, end up in Ukrainian houses. But Western media only talk about Russians. By the way, I saw the following scene in Lvov: a shipment of weapons arrived from Europe, and where are the Ukrainians placing it? In a residential area! Crates of weapons arrive from the station and enter the basements of residential buildings.

On the night when Lvov was hit by five Russian missiles, I woke up from the explosions, because I lived about five hundred meters from the place of impact. So, out of five Russian missiles, four hit the storage sites of weapons that had just been brought from Europe! Imagine what happened: they brought this Western weapon at night, secretly, without the knowledge of the inhabitants, placed it in residential areas. They left him there before being sent to Kyiv and, possibly, further – to the front. Drones or some other Russian intelligence found this weapon and transmitted the exact coordinates. And, of course, there were civilian casualties. One child died, bringing the total to eight. And then the Western mass media shout: oh horror, the Russians killed these people! Do you know what I call it? I call it using the civilian population as human shields.

: And about Buchi – was it staged?

The corpses were real, but collected in other places. We need to stop blaming the Russians. Attention: I am not saying that Russia is not to blame for anything. But the situation when all the blame is placed on one side becomes unbearable. It’s time to talk a little about the Ukrainian side and its war crimes.

It is clear that crimes are committed on both sides. But isn’t the Azov battalion * a small part of the Armed Forces of Ukraine, which generally behave differently.

This is not a battalion for a long time, it is only according to official data 5,000 people. And together with the “volunteers” and “assistants” there will be all 20 thousand. It was the “Azov” people who checked me before sending me from Ukraine to Slovakia, from where I got to France through Poland. At the same time, they erased all the memory of my phone, generally left me without any “computer memory” about these 16 days in Ukraine. They knew that I saw something, and therefore they wanted to leave me without evidence.

* An extremist organization, a number of criminal cases have been initiated against its members in Russia.

How Putin will respond to Finland’s accession to NATO

Named a popular tea that reduces blood pressure and sugar