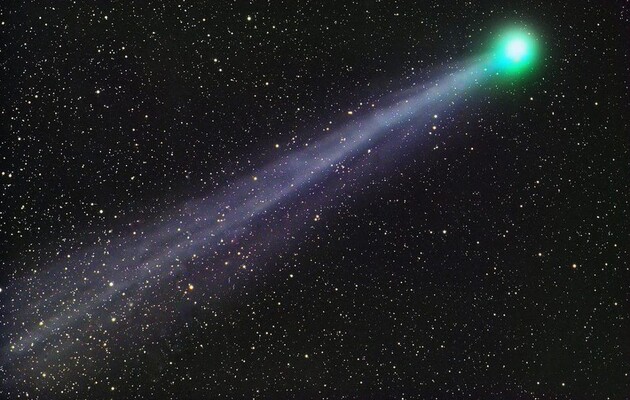 Five years ago, the Hubble Space Telescope spotted a bright comet at its furthest distance from the Sun, between the orbits of Uranus and Neptune. In mid-July, this incredible cosmic ball will approach the Earth at the closest possible distance, reports CNET.

Comet C/2017 K2 will arrive at its closest point to our planet on July 14. But even then, it will be farther from Earth than the average distance to Mars. Despite the impressive size of the celestial body, it will be difficult to see it even with small telescopes.

At the moment, it is not known exactly how large the comet’s nucleus is. According to various estimates, its diameter is estimated in the range from 18 to 161 kilometers. This means that it is somewhere in the middle between just a large and the largest comet known at the moment, such as comets Hale-Bopp and Bernardinelli-Bernstein.

The dimensions of the object’s tail are also unknown. Early observations show that the tail of C/2017 K2 extends 130,000 to 800,000 kilometers. This is roughly equal to the width of one or six Jupiters.

After approaching the Earth on July 14, the comet will continue to move towards the Sun, approach it at a minimum distance, and then begin to return to the outer regions of the solar system. However, comets can behave in unpredictable ways as they approach a star. They can become more active and brighter, or they can even fall apart.

Be that as it may, the July convergence is our only chance to experience C/2017 K2. Its orbit is so large that the next time it will approach our planet will be several million years later.

Recall Leonard’s comet approached Earth in December. It was discovered last January by astronomer Greg Leonard, and it is likely that it has spent the last 35,000 years traveling to the Sun. It is an ultra-fast comet, moving at a speed of about 71 kilometers per second.

“Revival of the 90s Model”. Igor Lipsits on shuttle imports and the future of the economy

Russians hit chemical plant in Severodonetsk, there is a threat to the population – Gaidai – Ukrainian news, Politics

Sweden to give Ukraine anti-ship missiles – news from Ukraine, World

These Americans live a stone’s throw from Russia. And that’s what worries them