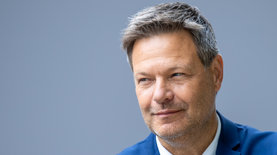 German Economics Minister Robert Habek is unhappy that the European Union followed the lead of the Hungarian authorities when it agreed yesterday sixth package of sanctions against the Russian Federation, resulting in the approval of a compromise oil embargo. He criticized the Prime Minister of Hungary Viktor Orban at a meeting of the Economic Council of the CDU, writes Spiegel.

As Khabek put it, he “ruthlessly” defended own interests and “European strength and resolve suffered” from it.

“It seems that we live in a time when too many compromises not only cloud clarity, but also destroy it,” said the head of the German Ministry of Economy.

Khabek stressed: the Russian dictator Vladimir Putin will not stop the war against Ukraine until he is defeated in it.

Read also: Zerkal called the lever of influence on Hungary: Something can happen to the Druzhba oil pipeline

The German minister called for the abolition of the principle of unanimity in decision-making at the EU level. (Chancellor of Germany Olaf Scholz On May 20, he advocated the same thing.) Now such decisions are made only on the condition that all the leaders of the member countries vote “for”: even one vote “against” leads to no decisions being made.

As Habek put it, Europe “must become viable.”

If you notice a spelling mistake, select it with the mouse and press Ctrl+Enter.

“Not by military means”: Monastyrsky made a forecast on the de-occupation of Crimea