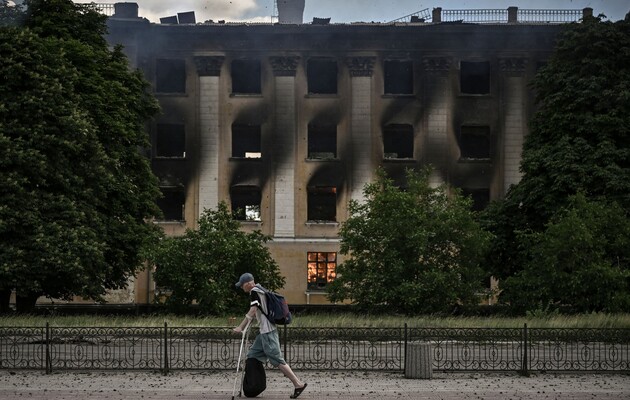 The Russian invaders are approaching Lisichansk and gaining a foothold in the settlements, informed head of the Lugansk OVA Serhiy Gaidai. He also said that the city was being bombarded by enemy aircraft.

“Lysichansk is now under heavy fire pressure. The city is shelled from artillery, tanks, aviation. There are at least three civilians injured, and several police officers were injured. The buildings of the police, the prosecutor’s office, and the SBU withstood the missile strikes,” Gaidai said.

Street fighting continues in Severodonetsk. Russian killers are again hitting the villages of Sinetsky and Pavlograd, on the already destroyed bridges. Twice in a day the invaders hit the territory of the Azot plant.

“This time, the territory of the treatment facilities and one of the checkpoints of the chemical association were damaged. The Russians are trying to block the units of the Defense Forces near Borovskoye and Voronovoye,” added the head of the Lugansk OVA.

Gaidai noted that it is now difficult in the direction of Popasnyansky. In particular, the invaders entered Toshkovka, which allowed them to increase their fire influence on other settlements.

“The occupiers are already gaining a foothold in Ustinovka, Podlesnoye and Mirnaya Dolina, and are advancing on Belaya Gora. It is not easy for our fighters to keep the defense in the Gorny area either. It is known that nine houses were destroyed in Gorny over the past day, seven in Zolote, and 12 in Novoivanovka,” Gaidai summed up.

Read also: The military of the Russian Federation seized the village of Toshkovka in the Lugansk region – Gaidai

The General Staff of the Armed Forces of Ukraine reported that the main efforts of the Russian occupiers continue to focus on the Severodonetsk and Bakhmut directionsto finally complete the seizure of the territory of the entire Luhansk region. The fighting for Severodonetsk continues, the enemy is trying to establish full control over the city.

Nobel Peace Prize winner: Ukraine has shown the essence of the West

“It was believed that a person does not need to be taught anything.” Is it necessary to apply the experience of the royal school in modern education