In the first four months of 2022, a quarter of people’s deputies, or rather 101 parliamentarians, stopped reimbursement of expenses related to the exercise of their parliamentary powers, according to the material of the Rukh CHESNO parliamentary analyst Alexandra Salizhenko for ZN.UA “Sanctions against truants: who people’s deputies lost “deputy” during the war“.

There are truants who did not receive funds in all factions and deputy groups, as well as among non-factional groups, but most of them are in the presidential party “Servant of the People” – 30 (although in general only 12% of party members truant), and among the former Opposition Platform for Life – 29 At the same time, 66% of the deputies skip the meeting in the last game.

Also, almost half of the composition of the deputy group “For the Future” – 10 deputies, 44% of non-factional people’s deputies (11 people) and a third of the “Batkivshchyna” – 8 deputies are skipping the parliamentary session. 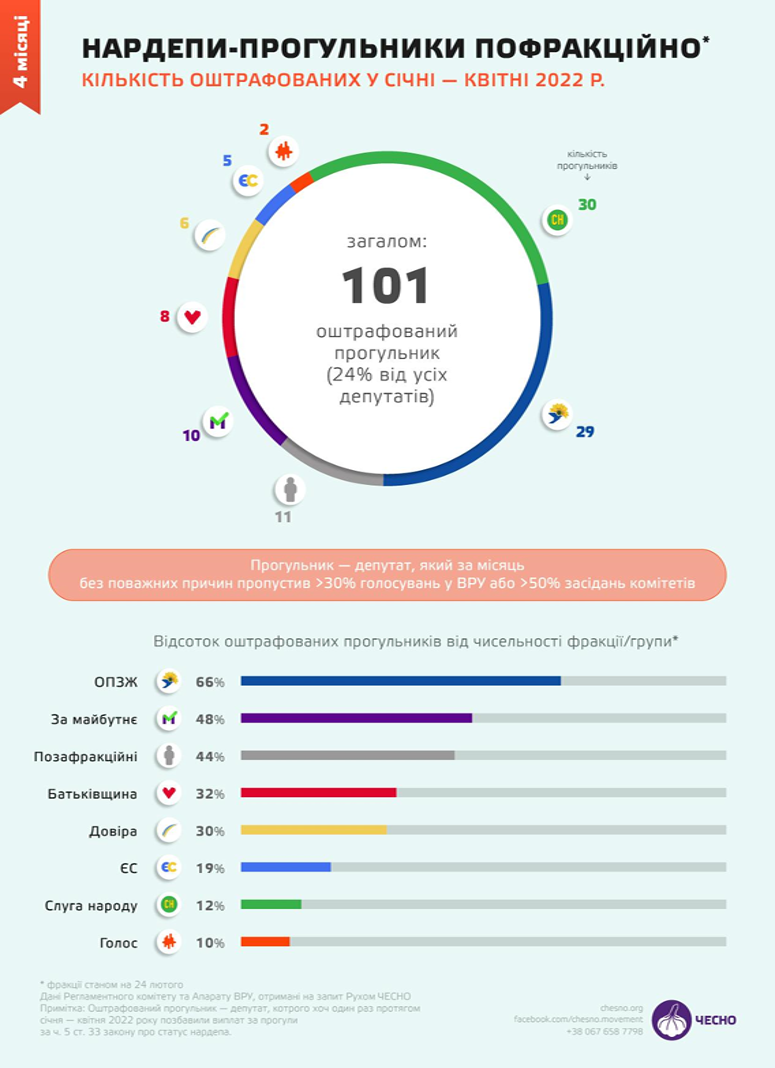 At the same time, such prominent deputies as the chairman of the Servant of the People faction David Arakhamia and his deputy Nikolai Tishchenko, the ex-president and head of the European Solidarity Petro Poroshenko, the leader of the Batkivshchyna party Yulia Tymoshenko, the Lyovochkin family from the PZZH , Restoration of Ukraine Vadim Stolar and Igor Abramovich and many others.

Read also: The State Bureau of Investigation opened a case against Deputy Kovalev due to cooperation with the occupiers

Recall that in October 2019 the Verkhovna Rada accepted amendments to the legislation, according to which a people’s deputy, who during the calendar month of one regular session, without good reason, does not directly participate in more than 30% of the votes in decision-making at plenary meetings or more than 50% of the meetings of the committee to which he was elected, for this a month they do not reimburse expenses related to the execution of deputy powers.

Estonian Prime Minister: There should be no business with Russia, Putin’s war must be strangled – Ukrainian news, Politics

“We need to soberly assess the situation.” Peskov – about Moscow’s expectations from Kyiv and the strengthening of the ruble

When will petrol be available at gas stations?

Kazakhstan voted for amendments to the Constitution – what Nazarbayev will lose